Between recent COMC pick-ups, the monthly Urbandale Card Show, and the generosity of other card collectors, I've managed to steadily increase my Tony Gwynn collection, little by little. However, with more than 10,000 Gwynn cards out on the market (some of those being way out of my price range) I've only made a miniscule dent in collecting Mr. Padre.
Of course, it's a never-ending battle. Even though he retired in 2001, every year there's more and more Tony Gwynn cards inserted into every set. For example, in 2017 alone (at least to date), another 51 Gwynn cards have been released into the market. 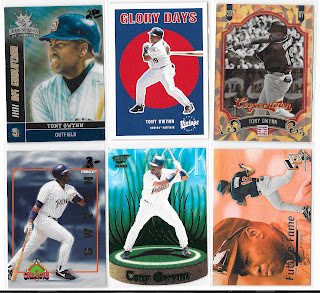 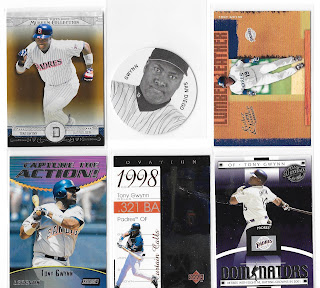 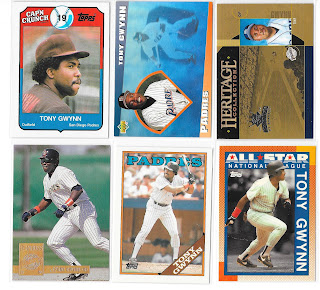 There's certain Tony Gwynn cards you figure you already have in your collection, such as most of the food issues, or Topps. However, believer it or not, these cards were missing from my collection until now - a 1989 Topps Cap'n Crunch (#5); 1993 Upper Deck Diamond Gallery (#17); 2005 Diamond Kings Heritage Collection (#HC25); 1994 Donruss Special Edition (#10); 1988 Topps Tiffany (#360); and a 1993 Topps Tiffany AS (#403). Of course, Tiffany cards fit into a whole different category, but I was more than happy to fit this pair into my Gwynn collection. 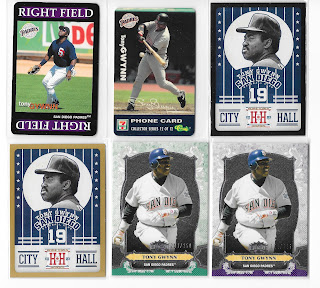 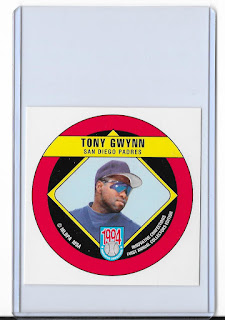 And let's not forget this 1994 Sucker Saver (#10). While it was produced by MSA, nowhere on the card does it say, "Sucker Saver." It actually has an Innovative Confections logo on the front and back It's one of those many Gwynn cards you're not even aware are out there.

So, there you have the latest additions to my ever-growing Gwynn collection, which has now grown to 882 cards.
Posted by Comatoad at 1:04 PM 1 comment:

I love watching Padres home games on Sunday afternoons. Proudly calling themselves the "Team of the Military," San Diego was one of the first teams to actively celebrate the military, actually inviting service members of the Marine Corps (a given, with the Recruit Depot just up the Pacific Coast Highway), as well as the Navy and Coast Guard to these games.
In 2000, the Padres began wearing Vietnam-era "Jungle" camouflage uniforms as part of Military Appreciation Day, and eventually, as part of thise Sunday home games celebrating the military. In 2006, they switched over to the "Desert Camouflage Uniform," and from 2011-2017, they began wearing "Marine Digital" uniforms sporting the camouflage pattern of the Marine Corps combat uniforms.
This year, it was the Navy's turn for recognition, as they switched over to that service's blue camo pattern. However, it seems its only worn on the Sundays they host Navy personnel at the game.
A few years back, my wife (God Bless her) got me a San Diego Padres Marine Corps camo jersey with my nickname ("McDuff") and number "36" on it. She also had the Tony Gwynn memorial black patch sewn onto it, following his death, in 2014. This year, she got me the Navy blue jersey, which is now part of the half dozen Padres jerseys in my closet.
While I haven't seen any memorabilia cards with the Navy blue jerseys yet, I have managed to find a few pieces of cardboard with nice-sized Marine Corps camo swatches on them. 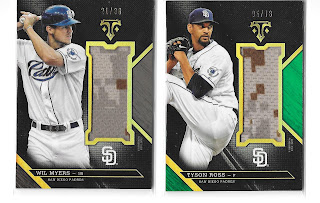 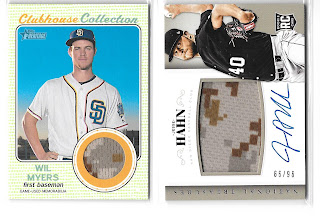 Myers also rocks a smaller version of the camo in my collection, with this 2017 Topps Heritage Clubhouse Collection Relics (CCRWM) card.  One of the earliest Marine Corps camo cards I've been able to find is this 2014 Jesse Hahn Panini National Treasures (163) (S/N 96/99). 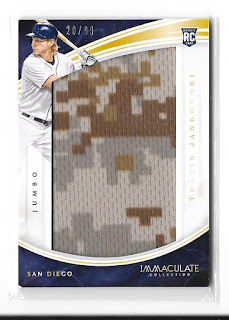 The biggest swatch of all, comes from the 2016 Travis Jankowski Immaculate Collection Immaculate Jumbo Materials (#42) (S/N 20/99). Jankowski has recently come off the Disabled List and is ready to begin a rehab stint in the minors. I hope we'll see him soon in a Padres unfiorm again, but I'm not sure where the center fielder would fit in the outfield right now.
I have another 2016 James Shield Topps Triple Threads Unity Auto Jumbo Relics - Silver card I've purchased (but not yet shipped), along with a couple of others on my COMC watch list, as well. I've also been occasionally checking E-Bay, but so far, this is as good as it gets.
Posted by Comatoad at 12:04 PM 5 comments: