On opening night of the Tucson-Iowa series, it took a rehabbing Matt Garza to keep the Padres bats in check, as Iowa won 1-0. Garza three-hit Tucson, as the I-Cubs picked up their lone run on a sacrifice fly by SS Donnie Murphy. 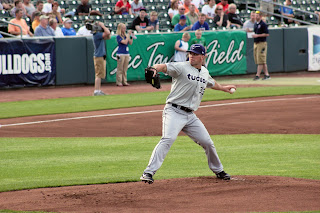 Clayton Richard got the start for the Padres, and except for givng up three straight singles in the second inning, topped by Murphy's sac fly, he held the Cubbies to four hits, with eight strikeouts. When he was hit, he was hit hard. 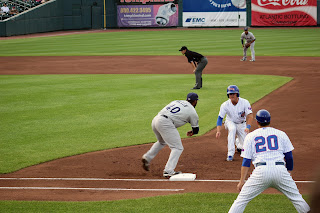 Tucson had a few bright moments however. Here, 1B Brandon Allen gets a Cubbie caught in a rundown. Allen and C Rene Rivera led the Padres bats, with a pair of hits apiece. Rivera looked pretty good behind the plate, handling Richards, Brad Boxberger and Tommy Layne. 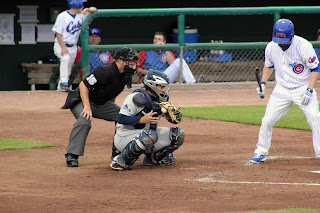 We're hoping to see Sunday's final game of the series, but the weather doesn't look good for Sunday. Otherwise, we're thinking of possibly heading out again tomorrow.
All in all, it was a good game, our first outing of the season.
Posted by Comatoad at 9:10 PM