While the Bonds name carries a wealth of experience in the baseball world, in reality, the Padres could actually brag about a Bonds of their own – OF Bobby Bonds, Jr., son of former San Francisco Giant Bobby Bonds and the younger brother of Barry and Ricky Bonds – who played within the Friars’ farm system from 1992 – 1994. 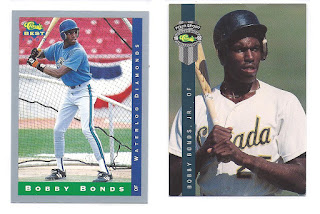 Bobby Jr., who bypassed high school baseball, got into martial arts because of his hero, Bruce Lee. eventually earning his black belt. It wasn’t until 1991, however, when he visited Pittsburgh’s Brandenton spring training camp with his brother Barry, that he realized how much he actually missed baseball.