The long and short of Tony Gwynn 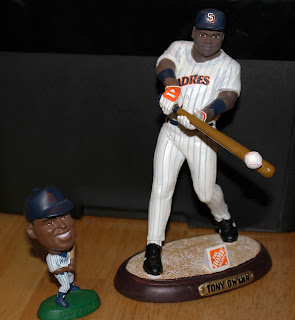 In the mail this past week, I received a pair of Tony Gwynn figurines -- the first I've ever owned. The great news, is they only cost 99 cents each. And both picture Gwynn in blue Padres pinstripes.
The tall one was a 2004 stadium giveaway from Home Depot. Numbered 4,039/16,000, it stands 7 1/4-inch tall and shows Gwynn finding the sweet spot as he connects with the ball. It's a plasticine figurine, so I'd be scared to death of dropping it. The bat also unscrews for storage and shipping.
To me, it's a pretty close approximation to the 10-foot bronze statue of Tony Gwynn dedicated at Petco's Park at the Park in April 2007. A little more than two weeks later, he would be inducted, along with Cal Ripken, Jr., into the baseball hall of fame. For those of you who may be curious, that's my wife and I during our 2007 visit to San Diego, after we saw Chris Young and the Padres beat the Giants 1-0. 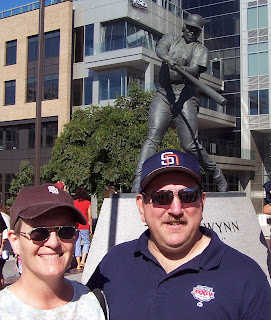 The other statue is the 1997 Corinthian Headliners Tony Gwynn. It stands only 3 1/4-inches tall, made of plastic, with a removable hat. This series, consisting of 34 figures, was produced by Corinthian Marketing and sold through mass market retail outlets at a suggested retail price of $3.99.
Needless to say, there was a fair bit of difference in shipping the two items. The larger Gwynn cost almost $13 in shipping, as it came in a larger box. The Corinthian Gwynn arrived in a simple padded envelope.