I'm in love with my mailbox!

You know, there's days when you just can't wait to come home and find out what's in the mailbox.

Of course, you can't help but know when the mail truck arrives at our house. Our dogs, Shetland Sheepdogs, better known as Shelties, start barking and spinning in circles. Since we live on a corner lot, they know it's an opportunity to go outside and sniff out who's passed by in the past few hours.

The past couple of days have been especially nice. Uh, I mean as far as what I've found in the mailbox.

Yesterday, I found an envelope from Tom, over at the "Waiting 'til Next Year" blog. I recently sent him some nice Cubbie cards, as well as programs from the local AAA Iowa-Cubs, that I've collected over the years (like I tell my wife, there are actually people out there who wants the stuff I collect along the way...).

In any case, according to Tom, "I found a couple vintage "semi-hi #'s" at my last card show. Thanks again for the programs and all the great Cubs cards."

Talk about some great cards. Since the Padres are a "relatively" young club, having come into being in 1969 with the the Kansas City Royals, Seattle Pilots and Canada's first MLB team, the Montreal Expos, they don't have the long vintage card history of a club like the Chicago Cubs. I'm always excited when I can get "older" Padres cards, such as these 1971 Topps cards of C Chris Cannizzaro and SS Rafael Robles.
Cannizzaro, a native Californian, may of had the most interesting career of these two early Friars. He became a Padre in March 1969, coming to San Diego from Pittsburgh, with Tommie Sisk in return for Ron Davis and Bobby Klaus. He became San Diego's first All-Star after hitting .245 with two home runs in the first half of the seaon. The Mets' Casey Stengel, who managed Cannizzaro in the early ’60s, had said, “He’s a remarkable catcher, that Canzoneri. He’s the only defensive catcher in baseball who can’t catch.” Following his MLB career, he became a baeball coach at the University of San Diego, later becoming their Director of Baseball Operations.
Robles was the Pads' 51st pick in the 1969 expansion draft from San Francisco. Despite playing only 47 games for San Diego, he's ensured a place in Friars history as being the very first Padres player to come to bat. On April 8, 1969, he also became their first baserunner (reaching first base on a Joe Morgan error) and their first base stealer, after nabbing second. He passed away in New York at the age of 50.
The 2013 Bowman Prospects Hometown Matt Stites was just icing on the cake.
Like I've said before, it's not a contest when I send out sports cards. With two great, local brick-and-mortar card shops with fantastic dime and quarter boxes, and a really nice monthly card show, I don't mind sharing the wealth, picking up cards that I know my blogging brethern will love. 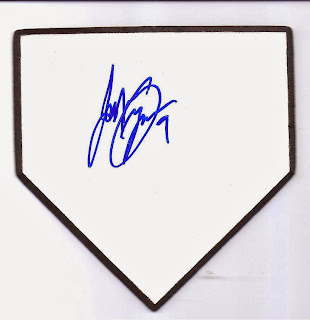 The other item in the mail, was a recent E-Bay purchase, a Jedd Gyorko signed, mini home plate, measuring 4 3/4 x 4 3/4. The guy made this piece out of wood, and then had Gyorko sign it. Gyorko, who's one of my favorite players among the current Padres, was just named to the Baseball America 2013 Major League All-Rookie Team. Despite missing 30 games to injuries, Gyorko hit .249  with 23 home runs and 63 RBIs in his rookie season. He led all  rookies in home runs (23), was second in RBIs, third in doubles (26) and fifth in hits (121). What a great piece of memorabilia!

Now, I can't wait to find what's waiting in the mailbox on Monday....
Posted by Comatoad at 1:10 PM