Finally over the moving blues!

Well, it's done and finally over!

After 17 years of owning a 3-1/2 bedroom house, we've actually taken the plunge, selling it and moving into a nice, 2-bedroom, 2-bath apartment.

The funny thing is, we weren't really planning on selling our house - at least not for another two years when I have to retire from the Iowa National Guard. In late June, my wife checked with our bank to see what we had left on our mortgage and mentioned we were thinking about down-sizing in a few years. 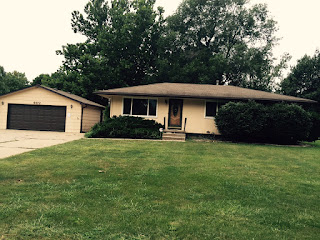 Two days later, our banker called back saying he had a real estate agent friend, who had a young client who just lost out on a house in our area. He was wondering if they could stop by look at our place. After two visits, the buyer came by a third time, with his mom in tow, to look it over. Within a few days, he asked if he could make an offer and provided one we felt we couldn't refuse at this point in time.

Of course, we now had to find a new place to live. We quickly narrowed down our choices, deciding to either remain here in Johnston, or find a nice apartment downtown. We settled on a nice, village-style apartment complex slightly more than a half mile from our former home.

And that, my friends, was the easy part.

Even though it seems as if we had a bit of time before the move, I had to depart for three weeks of annual training at Fort Polk, La. Shortly after I returned, my wife had to spend another 10 days out at the Iowa State Fair as part of her job.

That wasn't our only headache. Simply put, what do you do with that mass of stuff accumulated from 17 years of residing in one place? As my wife loved to point out, "Most of that crap belongs to you."

To give you an idea of my dilemma, here's a picture of just a small portion of my card collection room. This doesn't take into account the cards stacked against the other wall, the additional shelf space in the basement, nor the additional cards in my home office. 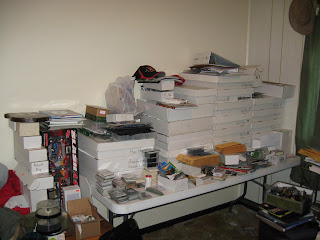 Again, my basic issue is I hate to throw anything out, because I know someone, somewhere wants and/or needs that stuff. Even the gaming cards. Even the basketball cards. Even the wrasslin' cards.

So, we began collecting boxes from work and began picking up those huge plastic tubs. We made numerous runs to our local Goodwill, Stuff, and Half Price Book stores, while giving away a whole bunch of other unneeded items to family and friends. We got a climate-controlled storage unit to put what we wanted to keep in, plus loaded up half of one of the two garages we got with our apartment.

Once everything was finally packed, we rented a Ford truck to haul most of our stuff and hired a local moving company for our bigger items like the bed, dressers and china cabinet. Then came the final reckoning of those items we weren't quite sure whether we wanted to keep or not, as well as a final dusting, mopping and cleaning of the house.

It was, however, a bitter-sweet afternoon when we signed the final paperwork and after 17-years of home-owning, turned in our keys and garage door openers to the new owner. What proved to be two to three weeks of a very stressful time for both us and our two dogs was finally over with the stroke of a pen.

Now that we're finally situated into our new place, though, we've discovered the fun part of figuring out exactly where everything is and what exactly did we pack certain items in. Our winter hats and gloves? Not exactly sure where they are. Some of my wife's art supplies? There's a chance they may be in the corner of our storage unit. The books I want to put into our new bookshelf? I haven't a clue.

My wife and I have, however, reached a working cardboard compromise -- I can keep my four, 5,000 count boxes of Padres cards on a shelf in the closet of our office, as long as she can't see them. Also, I can keep no more than two boxes of my inventoried baseball cards in the apartment, as well. So, if I need to bring in another box to inventory, that's fine. I just have to put it back into the storage unit once I'm done.

I can live with that.

While we thought we may have a few problems getting used to a smaller place, we really love it here. Things are so much more relaxing -- I don't have to worry about mowing the lawn anymore, or having to replace a leaky water heater. We're now actually free to do fun stuff on the weekends again.

Heck, I can't even wait to begin blogging again. Now, if I can only find that last box of cards......