A really primo package from the Prowling Cat

While I have to confess that I've been rather busy since the beginning of September, I also have to admit I've been a rather bad boy, too.

It's been about a month or so since I've received a package from Zenus at The Prowling Cat, an Oregon-based blogger with rather eclectic tastes. I had sent some minor league cards his way to help fill part of his collection, and he sent me a package of some pretty fun stuff.

First off, he did send me quite a few Padres cards and I would really love to show them off to you. Unfortunately...they got tossed onto one of the many stacks of cards on my desk. You can guess what happened next -- they got mixed in with all the other piles of cards that have been growing like Jack's beanstalk on my desk.

But I did get some other neat stuff from Zenus that I'd like to show off. Lets start with a pair of programs, one from the Eugene Emerald's, San Diego's Class A Short Season Affiliate in the Northern League, the other, "Blueprint," the official playbill of the San Diego Padres, from mid-June of this year. 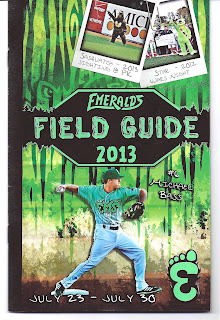 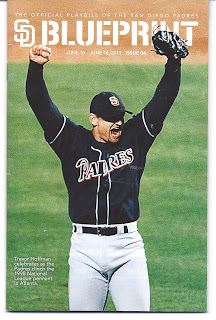 I love any and all printed material, including programs, yearbooks, books, etc. As a matter of fact, I'm now down to needing only six Padres media guides (1973, 1981, 1982, 1984, 1999 and 2003). For example, in the Emerald's "Field Guide" I love is seeing the player photos and the stadium diagram, as well as their promotions and giveaways. The Blueprint, meanwhile, is a lot more polished, with more feature stories and action photos (as well as the individual player photos). 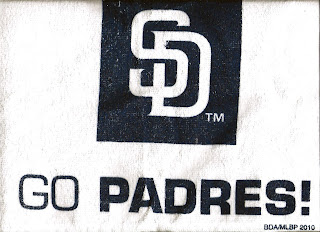 He also included a Padres "rally towel," (it didn't scan well), which has earned a hallowed place on my bulletin board at work.My co-workers know better than to get me in a conversaton about San Diego and/or my Padres. I can (and have) rambled on...and on...and on. 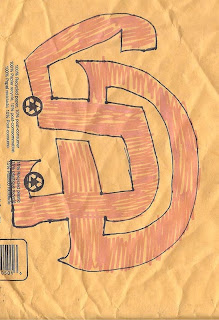 Finally, the Pièce de résistance -- Zenus decorated the back of the envelope with a San Diego logo. I kept looking at it upside down, trying to figure out what it was, before I realized what it was.That was a really nice touch, Zenus!


By the way, one of the unique things that Zenus collects is business cards from professional sports teams. If you come across any, be sure to give him a holler.
On a separate note, I'm getting to feel like I'm in one of those Bud Lite commercials about how "It's only weird if it doesn't work," as Stevie Wonder's "Superstition" plays in the background. Since I've gotten my MLB.TV Premium package, the Padres have not lost.
Tonight, they fell behind 2-1 on an Andrew McCutchen home run in the bottom of the seventh, but came back to win as P Andrew Cashner -- ANDREW CASHNER! -- entered the game as a pinch runner for Jedd Gyorko. Cashner -- CASHNER -- scored from second base on a Logan Forsythe single to tie the game, and then Rene Rivera's single scored Chris Denorfia. Houston Street then came in and shut down Pittsburg for the save and a 3-2 win.
Gotta love it (is that really Stevie Wonder playing in the background?)
Posted by Comatoad at 8:50 PM