Today's Padres game, at San Francisco's AT&T Park, marked the end of CF Mark Kotsay's 17-year baseball career. Except for the dramatic eighth inning, it wasn't much different than his last home at-bat, sad to say. After getting his last start in center field, Kotsay lined out, flied out and then grounded into a force out before coming to the plate with two outs in the top of the eighth inning, with the bases empty. 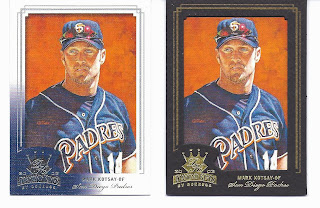 Giants coach Bruce Bochy brought in Barry Zito, who was also playing in his final game, to face Kotsay.  Was Kotsay able to get one last hit,  the 1,785th of his career?  Actually, you could probably have foretold the outcome, Kotsay struck out on three pitches, looking at the first two and swinging at the final one.

In his last act of his professional career, he  followed an old baseball tradition of leaving all his batting gear at the plate for the last time. Zito, meanwhile, was getting a standing ovation from the Frisco fans.

Eighteen years ago, Kotsay was the stud outfielder who led Cal State Fullerton to the College World Series in 1995 while being named the National Player of the Year. Florida drafted him the following year with their ninth overall pick. A Golden Glover, he was traded to the Pads in March 2001, along with Cesar Crespo, for Omar Ortiz, Matt Clement and Eric Owens, and moved to center field.

Two years later, San Diego sent him packing to Oakland for Ramon Hernandez and Terrence Long. After stints with Atlanta, Boston, the White Sox, and Milwaukee, he ended up back in San Diego in November 2011, signing on as a free agent.

The Friars gave him a great send-off during his final home game last Thursday, vesus Arizona. After reveiving a custom surfboard from Trevor Hoffman, Kotsay was penciled in as the starting center fielder. As he took to the field, the rest of the team remained in the dugout, allowing him to savor the home twon fan's adulation one last time.

What was even more heartening, was seeing his entire family at both his last home game and during his final game today at San Francisco. The San Diego feed on MLB.tv even showed his youngest son, in a full Padres uniform, shagging flies earlier this season with his dad in Arizona. After dad caught the ball, his son threw it back into the infield. That kid didn't have too bad of an arm, either.

It was nice seeing Kotsay heading off into the sunset. It would have been even nicer, however, if the Pads had won.

Kotsay won't be the only change the Padres face in the up-coming months. Chase Headley has already told the front office they're going to have to pay market value to keep him signed - he's not going to take the "San Diego Discount." "You have to at least understand where you are positioned in the market," Headley said, "It doesn't benefit myself or the other players to go out and sign a deal just to sign a deal, without it being a good deal.

Oh brother! In any case, this should be an interesting off-season. Hopefully, this will not be the winter of our discontent!
Posted by Comatoad at 6:49 PM