Having a Merry Chihuahua Christmas!

Sometimes, you just have to love what goes on at work and the people you work with. Especially during the holiday season.

Friday, when I arrived at work, there was a little bag with gift paper sitting on my chair. I moved it aside and began catching up with work.

By the tone of his voice, I felt I shouldn't delay any longer.

For starters, here's the card that was enclosed with the package (complete with a couple of gift cards). 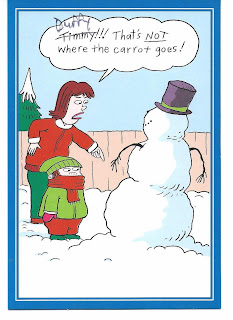 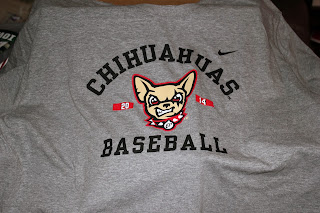 And now, for the rest of the story....
In October, I blogged, "Amid great fanfare and a tighter security system than that offered by the U.S. government, the El Paso ownership group announced the new team’s name – are you ready for this? – The El Paso Chihuahuas."
My co-workers roll their eyes whenever I discuss the platitudes of San Diego (the only screen savers I place on my computer are those of scenic San Diego). On this particular day, if I remember right, I was discussing my personal opinion of the new nickname of the Padres AAA affiliate. I mean, the Chihuahuas? Really?
According to our historian, after I left the office for a meeting, he turned to our colonel and said with a smile, "So, do you want to do it, or should I?"
"I'm already on the website," he grinned.
Hey, at least, I'm the first kid on the block to have the new El Paso T-shirt.
Merry Christmas, to all.
Posted by Comatoad at 6:43 PM