"She climbs a tree and scrapes her knee
Her dress has got a tear
She waltzes on her way to Mass
And whistles on the stair...

While it's not a bad problem to have, apparently the San Diego Padres have found themselves dealing with pretty much the same issue...

How do you solve a problem like Tommy Medica? 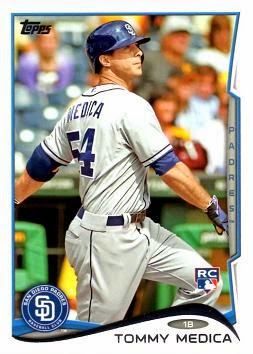 The problem the Padres now face, is where do you put this hot, young player, defensively? He's been a catcher, a first baseman, left fielder and right fielder. The Pads have plenty of catchers right now, with Yasmani Grandal coming back, and the outfield is pretty clogged as well, with any number of platoon situations involving Kyle Blanks, Chris Denorfia, Cameron Maybin, Carlos Quentin, and Will Venable. Lefty Seth Smith may be the player who's least likely to platoon.

A 14th-round Padres pick in 2010, the 25-year old Medica is flashing that raw talent the San Diego scouting staff projected for this young Californian.

As a Santa Clara Bronco, he won the West Coast Conference batting title as a freshman. Despite tearing the labrium in his throwing arm during his junior year (which moved him from behind the plate to the corner outfield positions), Medica was named to the first-team All-WCC, as well as an All-American third-teamer by Collegiate Baseball.

Like former Padre catcher John "Flash" Flaherty, Medica played for the Cape Cod League's Harwich Mariners (2008). The Mariners went on to win the league title that year and Medica was named to the All-League team.

He's even played on the international level, having played for the U.S. National Baseball team in 2007, competing in the Pan American Games (finishing second, losing 3-1 to Cuba in the finals) and the World Port Tournament (third place).

Last year, at AA San Antonio, Medica hit .296 with 18 homers. He was a September call-up and hit a homer against the Phillies in his first MLB game, all while playing first base.

Between you and me, I'd like to see him stick with the MLB club once Spring Training ends. However, I'm not entirely sure if he's the real deal yet, or how long he can keep up this torrid pace. at the very least, I can see him being dropped to AAA El Paso and being one of the first call-ups if there's yet another outfield injury.

In the meantime, the Padres find themselves with a rather pleasant dilemma.
Posted by Comatoad at 8:23 PM