So, you thought I had shown all the Padres cards I had found at the March Urbandale American Legion Card Show. I'm not quite sure why, but between the nickel box and the 25-cards/$1 box, there's one more group of cards I'd like to feature. 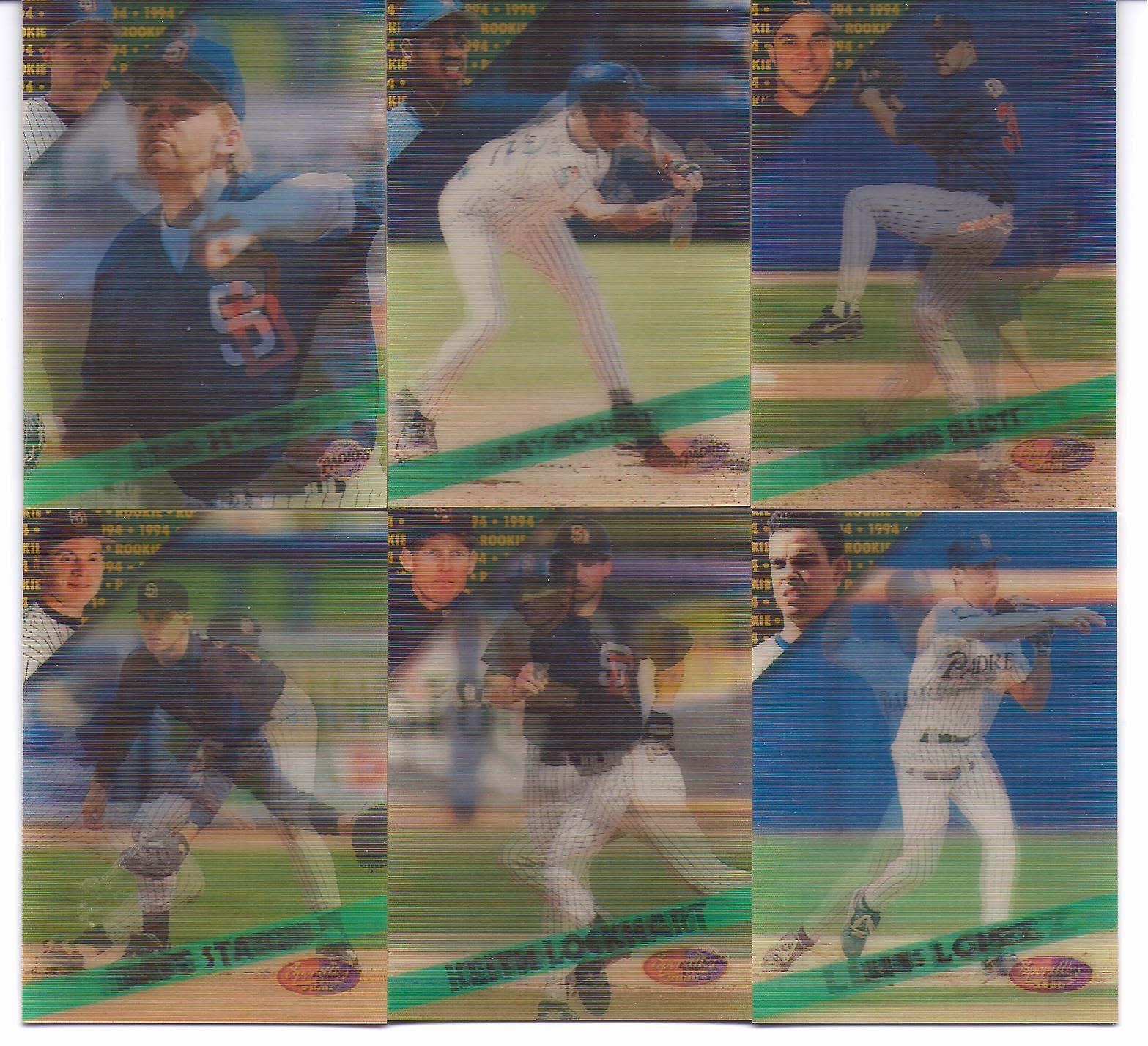 Since Sportsflics are always hard to scan, I've also included a scan of the card backs below. These 1994 Sportsflics Rookie/Traded cards include (top row) 1B Tim Hyers, SS Ray Holbert and P Donnie Elliott. (Second row) 1B Dave Staton, 3B Keith Lockhart and 2B Luis Lopez. 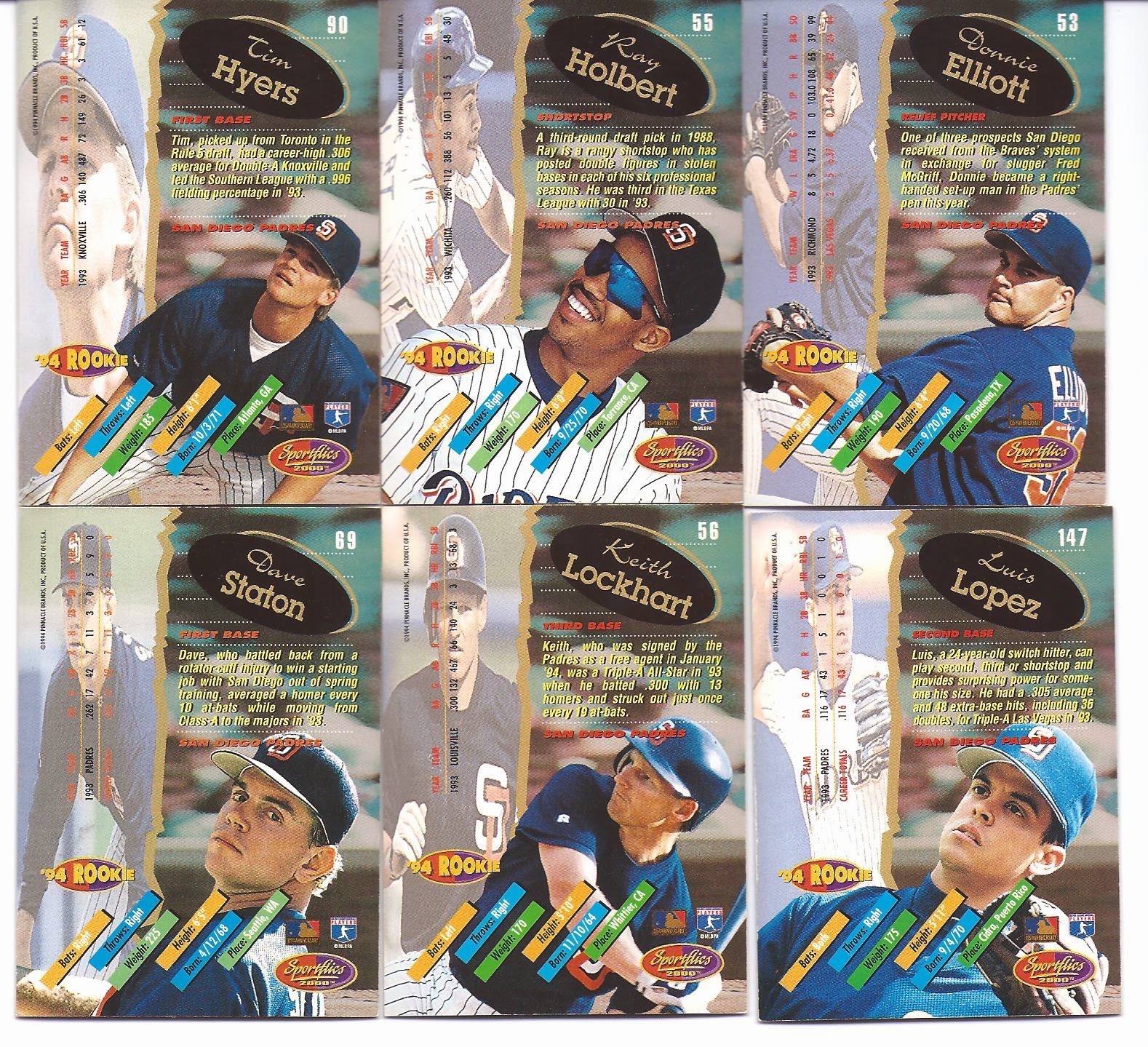 It was Topps who first introduced lenticular printing, where a small, ribbed, plastic lens is used to produce images with the ability to change or move as the image is viewed from different angles. It wasn't long before it found its way onto their 12-card, 1968 Topps 3-D set. Kellogg's also used this process, unleashing its own 3-D sets in your boxes of Corn Flakes during the 70's and 80s.

Of course, Upper Deck had to get into the act as well, partnering with Denny's Restaurant to produce a 26-card Denny's Grand Slam set. The set, which included one player from each of the MLB teams, was given out with each purchase of a Denny's grand slam meal. Pinnacle took over the Denny's set in 1996, releasing its final Denny's set in 1997.

At the time they came out, these 3-D sports cards were pretty cool. I thought it introduced a rather unique innovation during a period when baseball cards had that "mass-produced" feel to them. The main drawback that I can remember about the cards at that time, were the price - about 75 cents for a three-card pack. Actually, that's quite laughable in this day and age of "Premium Products.

You can see this technology continuing to be used in today's cardboard offerings. 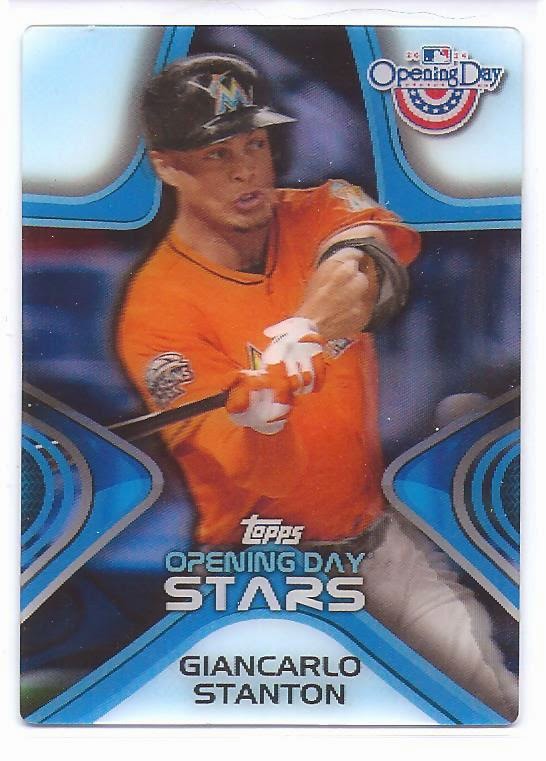 In fact, you only need to look as far as the 2014 Opening Day set. This card, the 2014 Topps Opening Day Stars Giancarlo Stanton, uses that same 3-D technology, as part of its 26-card subset.
Posted by Comatoad at 6:48 PM