Kudos and an apology to All the Way to the Backstop

Us Padres bloggers are a relatively close-knit fraternity. We know what we like, who we like, and share a wealth of knowledge and experiences regarding our brown and gold, and now blue-clad, ball players. We also share all those wonderful memories of having lived in "America's Finest City," even to the point of discussing which is better, In-and-Out Burgers, or Hodad's.
Marcus, over at All the Way to the Backstop, was the first blogger I contacted, once I decided to start up Bleedin' Brown and Gold. Since then, we've had some really wonderful trade opportunities.
What's funny, is the first time I received a package from Marcus in the mail, he listed his name on the return address as "M. Pond." My wife (who's been a Dr. Who fan since the David Tennent-era), said, "Ooh, you got a package  from Melanie Pond." If you're a Dr. Who fan, you'll get this.
Unfortunately, while I'm usually well-organized when it comes to my card cataloging system, whenever I get a package from Marcus, I set it aside with the best intentions of getting the cards inventoried, scanned and put up on my blog. In reality, with his last couple of packages, the cards have gotten mixed into my huge general Padres stack and I have a hard time telling which is which.
However, I recently received another wonderful package from Marcus, with yet another awesome stack of Friars. This time, rather than do Marcus a great injustice, I actually got them inventoried and scanned and here they are.

Let's begin with some sweet 2004 Upper Deck Sweet Spot, LF/1B Ryan Klesko (he's now a pre- and post-game analyst with the Atlanta Braves), Utilityman Phil Nevin (manager of Arizona's AAA affiliate Reno Aces), and OF Brian Giles (can you say "naked Padres hug?" and no, that's not a Valentine's Day reference). While this set is best known for its red and blue, and black-stitched autographed cards, I like the base card design. There's something about the "broken mirror" design that's kind of catchy. Their one drawback, they were about $9.99 a pack when they first came out. 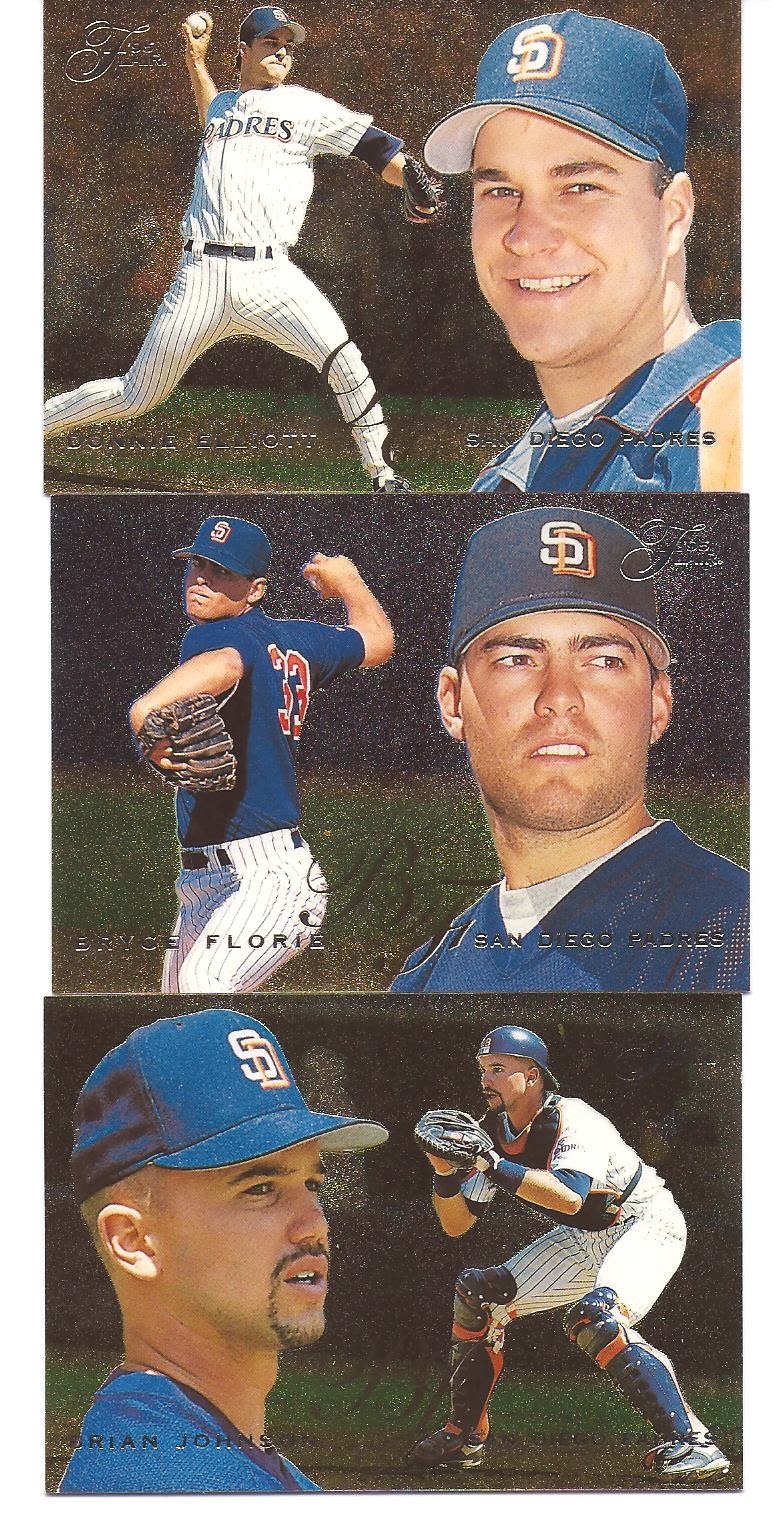 Here's 2001 Studio Rickey Henderson, 2001 Topps Gallery Trevor Hoffman (Did you know he had a kidney removed when he was a newborn) and a 1995 SP Foil Raul Casanova. I really like the "painted" card sets such as the 2001 Topps Gallery and today's Allen and Ginter cards. I like the die-cut Casanova card, plus what better name to display for Valentine's Day.

2008 Topps Heritage Tadahito Iguchi, 2007 Bowman Heritage Prospects Cedric Hunter, 2002 Upper Deck Year of the Record Rickey Henderson 2,248 runs scored. Of his many records, the one gracing this card was from 10/4/01, against the Dodgers, when Henderson passed Hall of Famer Ty Cobb on the all-time runs list. Henderson smacked a third-inning round tripper and slid into home for the 2,248th run of his career. He also erased Babe Ruth's record for career walks earlier that season.

Again, I want to thank Marcus for a really wonderful bunch of cards. And I also want to apologize for not giving your past great contributions the merit they truly deserve.
Posted by Comatoad at 2:21 PM