I recently received my monthly package of COMC goodies I get through completion of their inventory challenges. For every 1,000 points, I get $1 in COMC bucks, 100 points for every 50-card challenge. To me, it's just a little work for a few "free" dollars, and those "free" dollars definitely help to boost my card collection.
As for what I received in this month's COMC delivery, let's get started. In fact, I'm going to begin with a few cards of the puck persuasion. 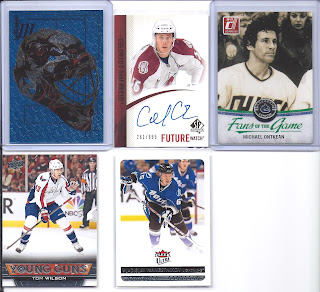 Actually, I'll begin with a 2003-04 BAP Memorabilia Masks III Ryan Miller (#5), 2010-11 SP Authentic Colby Cohen Autograph RC (#289) S/N 261/999, 2010-11 Donruss Fans of the Game Michael Ontkean (#4), 2013-14 Upper Deck Young Guns Tom Wilson RC (#212) and a 2014-15 Ultra Vladislav Namestnikov RC (#171).
Slap Shot has always been one of my favorite movies and you have to love that Ontkean card. The Chiefs' Ned Braden is now 69, and was also cast as Sheriff Harry S. Truman in Twin Peaks. An actual college hockey player, he scored 63 goals and 111 points in his three years and 85 games as a University of New Hampshire Wildcat. As a junior, he led the team with goals, finishing second his senior year. I also recently found a 2011-12 Pinnacle Fans of the Game Steve Carlson Autograph card and a 2011-12 In the Game Enforcers autograph card of Bill Goldthorpe (Ogie Ogilthorpe). And yes, I'm definitely on the lookout for anything and everything Slap Shot-related.
Of course, I have to take advantage of picking up any new Tony Gwynn cards I can get my hands on, and this month I added another 16 unique cards to my Gwynn collection. After all, free cards are free cards, right? Especially when it comes to a one-of-a-kind Hall of Famer like Gwynn. 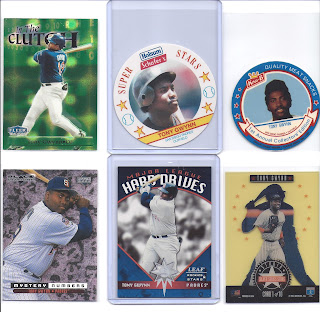 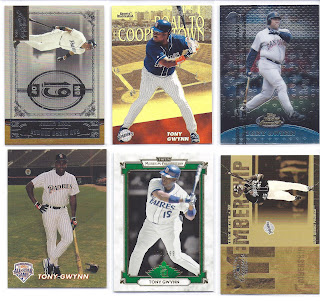 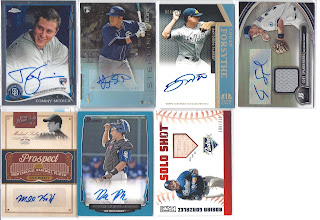 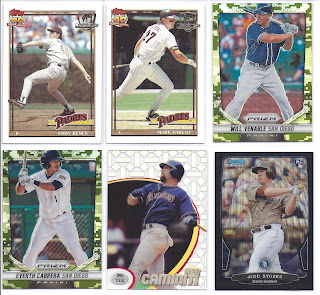 I was able to add a pair of 1991 Topps Desert Shield cards, with an Andy Benes (#307) and Mark Parent (358), as well as a pair of 2014 Panini Prizm Prizms Camo of Will Venable (#30) and Everth Cabrera (#41). This 1998 Topps Tek Pattern 31 Ken Caminiti (#68), and 2013 Bowman Chrome Draft Black Wave Refractors Jedd Gyorko (#31) were also nice additions. As I've said before, I really have a soft spot for those Desert Storm cards, especially since I was unable to track any down while I was deployed at that time.
And finally, I got my grubby little hands on a little Padres slash, dash and color. 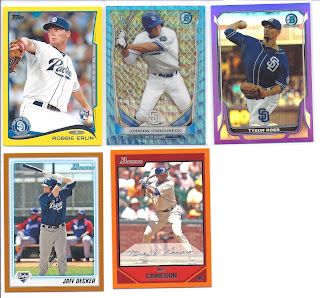 
As of this morning's COMC statistics, I'm now up to 369,680 points, and sit 47th on their leaderboard, as far as all-time challenges go. The stats further point out I've received about $370, good for 335 cards, 13 of which are yet awaiting shipment in next month's collection.
Posted by Comatoad at 11:55 AM No comments: