"Can" you guess my latest Gwynn collectible?

While perusing our monthly card show, I came across yet another unique Tony Gwynn collectible that I just had to have for my collection.
"Can" you guess what it was?
If you wagered a guess of the 1998 Pinnacle Inside, you're spot on!
In 1997 and 1998 Pinnacle produced cards which were sold in a collectible, steel, soup-sized can. You actually had to use a can opener to get the cards out. Of course, I don't care about the cards that might be inside, as I'm not about to open this particular Gwynn can.
This Pinnacle set was released in July 1988 and featured 150-cards, with 23 different players on the cans. There were 48 cans per case and 10 cards per can, packaged in clear cellophane. The cans themselves went for about $2.99 each. There were also two gold cans within each case. 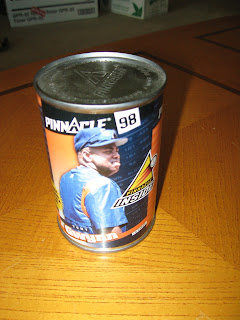 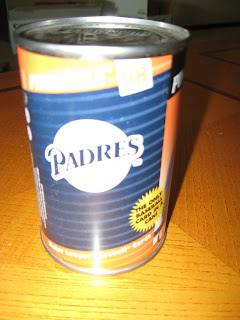 Nutrition facts, or basic per-serving nutritional information, were required on foods under the Nutrition Labeling and Education Act of 1990. According to this act, food labels must list the most important nutrients in an easy-to-follow format.

This can also follows the rules of the act. Among the Product Facts the can lists, "Collectability" comes in as 100% of the daily value. "Top Players," "Inside Info," and "Cool Inserts" are also listed as 100% of the Daily Value. 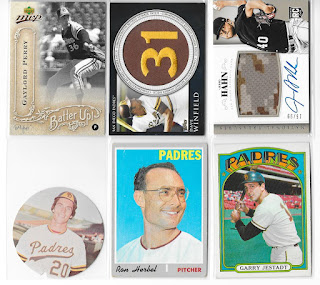 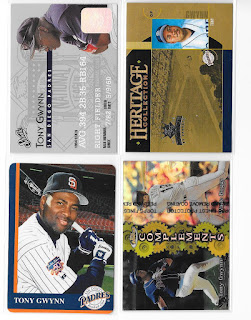 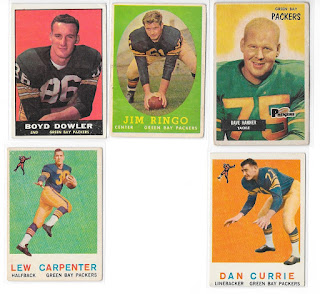 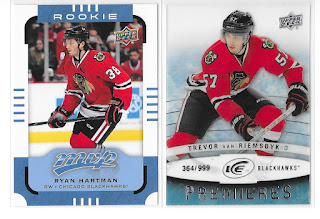 And finally, I had to scratch my hockey collecting itch, adding these two Chicago Blackhawk cards - 2015-16 Upper Deck MVP Ryan Hartman SP RC (182) and a 2014-15 Upper Deck Ice Trevor van Riemsdyk (#92) S/N 364/999.
I also picked up a few extra cards for all those good little sports card bloggers as part of my annual "Bleedn' Brown and Gold" Christmas Card list. And yes, I checked my list twice, trying to figure out who was naughty and nice, and got most of my cards into the mail the past week. There's just a couple I still have to get into the mail, though.
Posted by Comatoad at 8:26 AM 2 comments: