While I haven't been checking out the blogging biosphere tooo much lately, I've at least continued to help COMC with their inventory efforts. February produced my latest batch of cards resulting from that assistance.

According to COMC's statistics, I've thus far accumulated 685,965 points, good for about $685 ($1 COMC cash for every 1,000 points) which I've since converted into 624 cards purchased to date. I'm actually in 47th place on the all-time leaderboard for their inventory challenge.

As for my February order, my selection of more than 50 cards was all over the board. They ranged from San Diego Padres and Tony Gwynn cards, to Packers, Wild, autographs, and political pieces of printed cardboard.

I'll begin my February COMC package with scans of my most favorite Padre of all, Mr. Padre himself, Tony Gwynn. 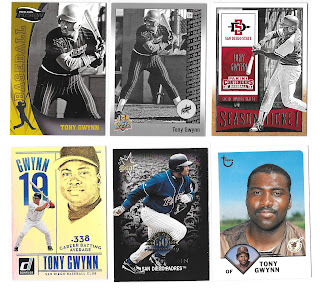 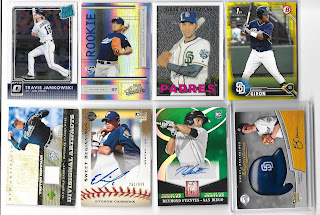 Otsuka, a pitcher who I enjoyed watching pitch and who toiled from the San Diego bullpen from 2004-05, now serves as their Triple-A bullpen coach at El Paso. As for the Cameron Sweet Spot helmet card,  I just felt it was especially sweet.

Since we're now in our fourth year as Iowa Wild hockey ticketholders, we're seeing more and more of our players moving up to (and sticking with) the Minnesota Wild. So, I decided to go off onto another collective bent and start collecting autographs and rookie cards of those players we've seen skating here at Wells Fargo Arena. I already have autographed sticks and programs these players have autographed over the years during team autograph sessions, but I felt having certified autos and nice RCs of these players would be a nice touch, too. 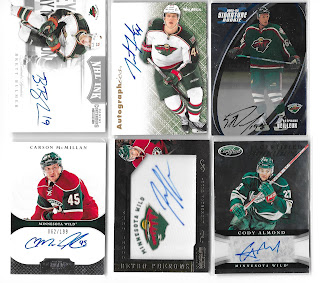 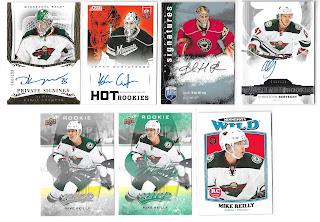 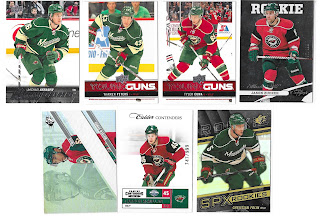 During my last shipment, I picked up a few Green Bay Packers autographed cards. Now I'm not too sure if I want to really attempt to collect all the Packers autos. 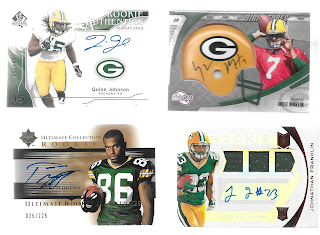 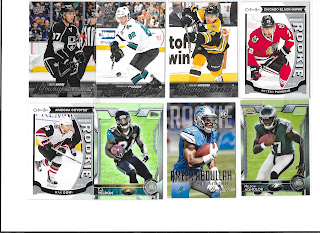 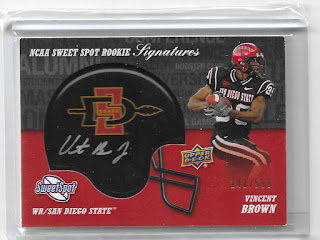 And finally, remember how I began this blog with the Tony Gwynn San Diego State baseball cards? I'll now conclude it with this 2011 Sweet Spot Rookie Signatures Vincent Brown (#RVSB), S/N141/599. And again, like the Padres helmet and Packers' helmet auto, I really do like this San Diego state helmet auto. Considering I almost went to San Diego State during the time we lived here, the Aztecs are one of the teams I actually follow on college football Saturdays. Rocky Long has done one heck of a job with this team.
Posted by Comatoad at 9:16 AM 2 comments: