The joys of a 24-card Gypsy Queen Blaster

My wife truly loves me.
While I was up in Ames yesterday, officiating at the Iowa State University Big 4 indoor track meet, Jan decided to do a little shopping at the Walmart in West Des Moines. Since I hadn't picked up any cards in a while, she thought she'd pick up a pack or two as a surprise.
She settled upon this 24-card 2015 Gypsy Queen blaster. Her reasoning: The Gypsy Queen packs run $2.99 each for six cards. She'd be getting four packs worth of cards, and paying about half the price.
I have to admit, this was a rather nice surprise. 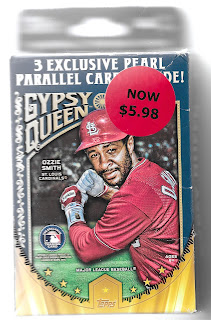 All 24-cards were packed in a single cellophane bag inside the box, which by the way, included "3 Exclusive Pearl Parallel Cards Inside!"

There were also three rather nice insert cards, as well, including The Queen's Throwbacks Miguel Cabrera (#QT1), Mini Red Max Scherzer (#93) S/N 45/50, and a Walk Off Winners Travis Ishikawa (#GWO19). Sometimes black and white photographs work on cards, especially with retro jerseys. I don't feel it particularly worked on this particular Cabrera card. 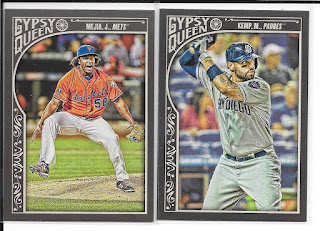 Two particular cards especially caught my attention. The first was a Jenrry Mejia (#285B). Mejia is one of those hard-to-find variation cards that I've never been able to pull. This particular variation finds him sporting the orange New York Mets jersey. The second card I was happy to pull was this San Diego Padres Matt Kemp card (#38). A Padre yes, but, maybe it's just me, but I still find it weird to see Kemp wearing the Padres blue and grey, instead of the Dodger's grey and blue.

My wife - What a great woman!