While I was shopping at the September Urbandale American Legion card show, I came across a dealer who had 10 huge, 5,000-count boxes full of baseball and football cards for 10 cents each. After digging around, I also found a single row box of 2010 Topps 206 cards. What was especially interesting was the fact this box didn't look as if anyone had dug through it yet, and yes, all the cards in this box were 10 cents apiece as well. 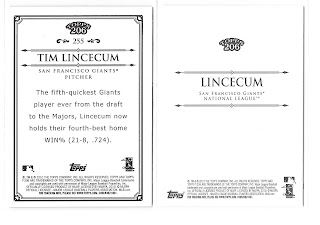 Unfortunately, I struck out on finding any Padres in this box, what did make this a fantastic find, however, was the fact there was a boatload of Topps 206 short-printed SP cards in the box, including a whole mess of minis.

For those not aware of the 206 SP cards, the backs are unnumbered, and were only distributed one in every four packs. This Tim Lincecum Bronze (#255) and Lincecum SP (#333) card demonstrate the difference in the SP cards, which only have the player's name, team name and "American League," or "National League." 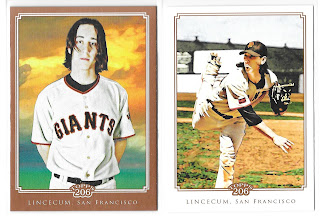 As for the card fronts, as shown by the Lincecum Bronze and Lincecum SP, the SP cards are also unique in that they feature artwork of the players with their hats on. 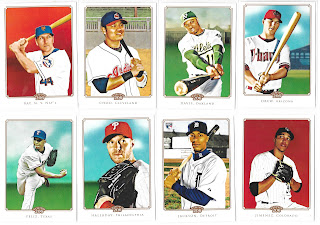 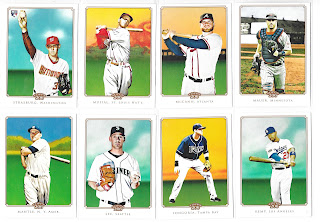 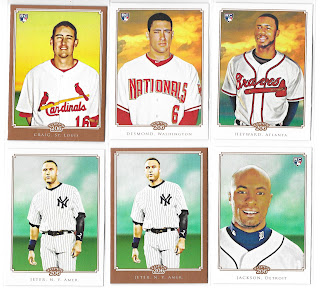 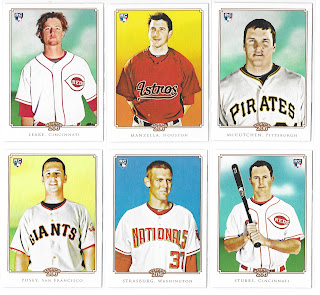 If mini cards are your things, check out my next post, when I'll show the awesome mini cards I found from the same dime box from the Urbandale American Legion card show.