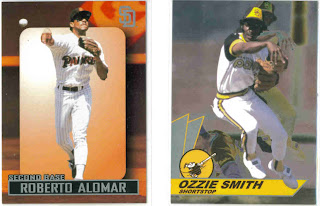 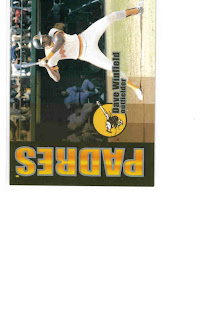 This 13-card set is really a unique looking set. What makes it even more cool is the different card fronts, which kind of blend together in a weird sort of way. The Ozzie Smith and Randy Jones cards look alike, The Gaylord Perry and Steve Garvey are about the same, but with a silver strip instead of the yellow.The Winfield card is my favorite of the set, with the "mirrored," vertical  Padres.  The Santiago and Finley cards also have the same look, only with a different color. the Bochy, Hoffman and Brown card have a funky blue marbled background. The Alomar card, meanwhile, like the Tony Gwynn card, is in a class by itself. While the card backs are rather blah, black with the Carl's Jr. and Sycuan Casino logo, I rather like this set.
Posted by Comatoad at 7:27 PM