Since I'm always on the watch for the different and unique, especially when it comes to Tony Gwynn, I recently added yet another oddball item to my Gwynn collection. 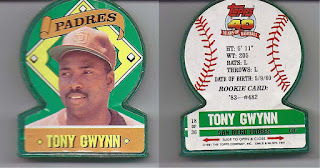 The 1991 Topps Stand-Ups Tony Gwynn, #18, was part of a 36-piece test issue. Measuring 2-1/16 inches wide and 2-9/16 inches tall, they consist of a hard plastic case filled with baseball-shaped, sweet tart-like candy. Some folks say they're formed in the general shape of a head and shoulders, but to me, they just look like a baseball on a pedestal. 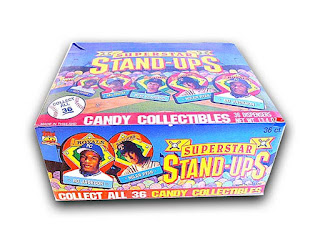 Stand-Ups were sold 36 "dispensers" to a box, each in its own color-printed paper envelope. There were 36 players within this set, ranging (alphabetically), from Jim Abbott to Robin Yount. I have no idea what the collation may have been like.
Being a member of the National League, the Gwynn Stand-Up is green. While American League players featured a red case, there was also a rarer clear, or non-colored, plastic container created for all 36 players in the set.
The label attached to the front has the player’s photo with his team name in a banner above and the player’s name in a strip at the bottom. The backs feature a baseball design, and since they were issued in 1991, they include the ever-present Topps 40th anniversary logo at the top center of the baseball.
The back also included the player's name,  team and position (color bars at the bottom), along with the dispenser (card) number at left. Located within the center, was the player’s height, weight, birthday, batting and throwing preference, and the year and number of his Topps rookie card.
The candy dispensed from the bottom. My "dispenser," doesn't have a single piece of candy in it - it's just an empty shell.
It's probably just as well. Can you imagine what the candy would taste like now, 22 years later?