After a tough day at work today, I came home to find a couple of great packages from recent E-Bay purchases. Once I opened them, I  was equally pumped about the contents of both packages. As for the other package, I'll go into detail about that tomorrow.

As a result of the first package, I now own two, San Diego Padres 1/1 Magenta Printing Plates. I got both of them from the same seller, who had a "or best offer" caveat with the plates. After some give and take, he finally accepted an offer on both the cards. I apologize if the scans aren't the best... 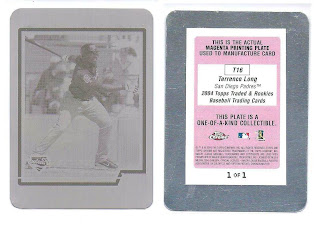 The first one is the magenta printing plate for the 2004 Topps Traded and Rookies Terrence Long #T16. After starting with the Mets, and then the A's, Long, a left-handed OF, was traded to San Diego, along with Ramon Hernandez on Nov. 26, 2003 for Mark Kotsay. That's how we ended up in the Topps Traded set. He wasn't in a Padres uni for long, however, as he was traded to Kansas City less than a year later, along with Dennis Tankersley and cash, for Ryan Bukvich and Darrell May. Long, who spent most of the season backing up Ryan Klesko in left and Jay Payton in center, hit .295 with three homers and 28 RBIs in 136 games. 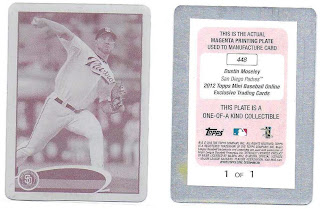 The other plate belongs to Dustin Moseley and his 2012 Topps Mini #448. Even though he didn't do much for the Pads, I like the Moseley card, since it was from last year's offerings. After being non-tendered by the Yankees, he signed a one-year contract to pitch in the friendly environs of Petco Park. He disclocated his left shoulder after getting a base hit in July, ending his season with a 3-10 record and 3.30 ERA (a career best) in 120 innings. Making matters worse, he made only one start in 2012, before clearing outright waivers.

While I already own one printing plate (a 2009 Topps Chrome Cyan Printing Plate Jon Garland (Angels) #57), which I'm looking to trade for a Padres plate, I now own my first Padres 1/1 plates. And to top it all off, there's a couple more plates I have my eye on.