Since finding those boxes of minor league cards in my basement I've added a whole mess of junior Friars to my Padres collection. Along with the new additions, I decided to begin posting "Minor League Mondays" in honor of those players who were part of the Padres family, but yet never had a "cup of coffee" with the parent club at Jack Murphy or Petco.

The first player to grace this weekly feature, while a minor leaguer who never made it to San Diego, still played a large role in Padres history. You may even say his influence is still being felt within the Padres, even today. 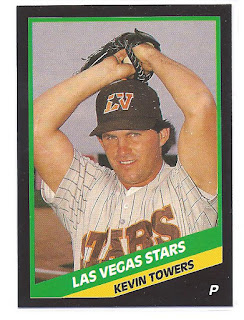 Pitcher Kevin Towers was was the first Padres pick in the 1982 MLB June Draft-Secondary phase from Brigham Young University. He pitched eight seasons, compiling a 29-40 record, with a 4.64 ERA, before elbow injuries ended his career in 1989. A promising right-hander, he was a Texas League All-Star while pitching for AA Beaumont in 1984.

Recognizing his pitching abilities, the Padres named Towers as their A-level pitching coach at Spokane, before he moved up to the scouting ranks. In 1991, he served two years as a Pittsburgh Pirate scout, before returning to the Friars as their scouting director in 1993.

Towers was named the Padres' seventh general manager in 1995, succeeding Randy Smith (who moved on to the Detroit Tigers). As a Padres fan, you should know the rest of the story - the Padres posted a 1,107-1,160 record during this time, winning four division championships, the club's second National League championship, and a trip to the 1998 World Series, where they were swept by the New York Yankees. As for wheeling and dealing, he may be best known for trading 2007 Cy Young winner Jake Peavy to the Chicago White Sox for four pitchers - Clayton Richard, Aaron Poreda, Adam Russell and Dexter Carter. The deal reportedly saved the Friars some $56 million in payroll.

Towers' reign ended in October 2009. Despite being the longest-tenured GM in MLB (14 years), he was fired by then-new owner Jeff Moorad and replaced with Jed Hoyer. At the time, the Padres were 74-85, on the tails of a 99-loss season in 2008.

He is currently serving as the GM for the Arizona Diamondbacks.
Posted by Comatoad at 9:22 AM