You can learn a lot from Padre Media Guides

Of course, being a die-hard Friars fan, I collect everything and anything having to do with the San Diego Padres. Besides receiving a pair of printing plates in yesterday’s mail, I also received another package, bigger than the first one, that I was just as excited about.
One of the many things I collect are Padres Media Guides. In existence since the late ‘60s, media guides were originally created to provide sports journalists information relating to the players, history, and statistical records for that specific team, which proved useful in broadcasting and writing their stories.


Media guides have since exploded in today’s information age. What were once small, 4.5” x 11” pamphlets have now grown to 400+ page tomes.  Some teams, such as the Detroit Tigers, even have some of their guides archived on their team web site. 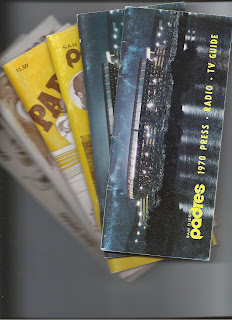 In yeseterday’s package were media guides for 1970, 1971, 1972, 1974, 1975, 1976, and 1977. While I already have the ’76 and ’77 guides, as a package deal, I couldn’t pass this one up. Even better, I still have the Padres’ inaugural 1969 guide coming my way, as well as the 2012 issue.
I love the guides because they’re a definitive piece of Padres history. Where else can you find a complete Padres player and staff roster for each year, including a complete player biography? You also get player development reports for each Friar minor leaguer, information on each opponent for that season, a review of the previous year, history and records, and info on both Padres management and media crews.


Padres greats, such as Tony Gwynn, Dave Winfield, Randy Jones and Jake Peavy have graced the covers, as have images of Jack Murphy, Petco Park, boats, battleships and Padres memorabilia.
It’s a great little piece of history, perfect for any and all Padres research!