As December's Christmas holiday festivities kicked in, Tolfer, over at the Crackin Wax graciously invited me to take part in his 2nd annual Crackin' Wax holiday trading card gift exchange.

The rules were simple. Once you sign up, you're paired up with a Secret Santa. Someone (you have no idea who) is your Secret Santa and gets to put together a Christmas package for you. In the meantime, you are given someone else's name and that's who you have to shop for.

While I had a lot of fun finding goodies for my giftee, my Secret Santa, Nate of Chatham, Ill. appeared to have just as much fun putting together a package of Padres a'plenty.

As readers of my blog know, I love any and all Padres publications. So what's the first thing I find in my Secret Santa package, but a 1992 Upper Deck All-Star Fanfest program. The All-Star game, held in San Diego that season, featured three Padres starters -- Benito Santiago (C), Fred McGriff (1B), and Tony Gwynn (OF) -- and reserves Gary Sheffield (3B) and Tony Fernandez (SS). Unfortunately, the National League team was drubbed 13-6 by the American Leaguers. 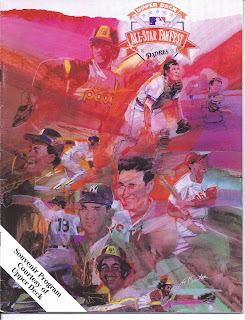 And then there was the great assortment of cards. There were cards of the vertical persuasion, those that sat horizontal, as well as ones that were all shiny, with handwriting and gold-printed numbers on them.

Andrew Cashner, San Diego's pitching ace heading into the 2014 season was represented, with his 2013 Topps Triple Threads Jersey Auto, S/N 68/99. There was also this 2011 Topps Marquee Titanic Threads Heath Bell, S/N 49/99 and a Bowman Draft Future of the Franchise Blue Jedd Gyorko, S/N 43/250. I really got to like Gyorko more and more as the 2013 season wore on and he should have finished higher than sixth place in the Rookie of the Year voting than sixth place. All he did was finish first among all rookies in home runs, on-base percentage and slugging, second in RBIs, third in doubles and fifth in hits.

Nate continued my recent run of Garvey cards (I found a gaggle of Garveys at December's local card show), with this 2004 Topps All-Time Fan Favorites Steve Garvey. He also included a couple more autos -- a 2013 Bowman Chrome Rookie Autographs Casey Kelly and a 2013 Topps Tier One On the Rise Autographs Yasmani Grandal S/N 158/399. Has anyone heard how Grandal's rehab is gong? It looks like it'll be Nick Hundley and Rene Rivera behind the plate once the season opens. Which is ok by me, since I appreciate the job Rivera's done back there and it seems as if a lot of the Padres pitchers like him backstopping them. 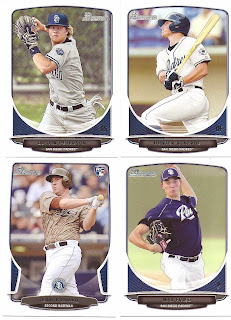 Nate (or rather Santa) wasn't done yet. Also included in the package were a near-complete Padres team set of 2013 Allen and Ginter, and then a bevy of 2013 Bowman youngsters -- a Bowman Draft Draft Picks Dustin Peterson, Bowman Draft Drat Picks Hunter Renfroe, Bowman Draft Jedd Gyorko RC and Bowman Draft Top Prospects Max Fried. These players are the hopes of the Padres future, so I'm definitely looking forward to seeing these players move up through the Padres system enroute to action in San Diego.

Again, thanks to Crackin Wax for inviting me to take part in this year's Secret Santa gift exchange.

And an even bigger thank you to Nate for the wonderful Christmas gifts. I really appreciate all these Padres goodies!