﻿
It seems I've always had a love/hate relationship with E-Bay. There's occasions where I'll be checking it on a daily basis to see how items I have up for sale are doing. There are other times when I can look it over and not even give a hoot - there's nothing of interest out there.
Unfortunately, there's other times (like the past couple of weeks) when I just can't help myself.
Part of the problem, being the cheapskate that I am, I can easily justify buying a nice looking card if it's an extremely sweet deal. For example, these three autographs were only 99 cents apiece. You can't beat that price, right, but what helped seal the deal for me was each of them included free shipping. Are you kidding me? 99 cents AND free shipping?

All three players were Padres pitchers when I lived in America's Finest City and I can remember seeing them pitch at Jack Murphy (By the way, I can never bring myself to call it Qualcom Stadium. It was named after a person for a reason, so it'll always be "the Murph" to me). Of the three, I think Shirley was the most exciting to watch, especially during his 1977 rookie season, when he led NL rookie pitchers in wins, starts, innings pitched and strikeouts. D'Acquisto was 16–21 with a 4.24 ERA in 152 games with the Padres after completing a three-game season with the Cardinals. Mura turned out to be a much better pitcher for the Cardinals, winning a ring as part of their 1982 World Series Championship. 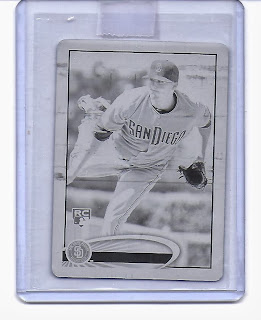 I was able to add yet another 1/1 printing plate to my collection, this one the black plate from Brad Brach's rookie card from the 2012 Topps Mini Baseball. If you ever check out Brach's Twitter page, he prefaces it with "Blessed to have my dream job San Diego Padres Organization." He's bounced back and forth from AAA Tucson to San Diego, but has managed a 3.65 ERA in 24 2/3 innings of relief work pitching for the parent club. 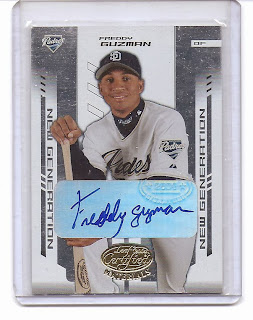 How about a 2004 Leaf Certified Materials Freddy Guzman autoraph, numbered 319/500. Guzman was pretty much a player non gratta in San Diego, playing 20 games as a late season call-up in 2004, recording 16 hits and 13 strikeouts. An elbow injury kept him out for the entire 2005 season and he has since bounced around with the Rangers, Tigers, Mariners, Red Sox, Yankees, and Phillies. He was signed as a free agent by Tampa Bay in August. 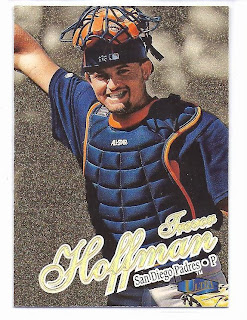 And finally, here's a pretty cool Trevor Hoffman card I found in the dime box at RyansCardz, a 1998 Ultra Gold Medallion. While some bloggers enjoy seeing catchers in their full regalia on a baseball card, how cool is it to see Hoffman pictured wearing catcher's gear.

By the way,  I still have a few of the 1989 Topps baseball books left - Brewers, Mariners, Phillies Rangers and Twins,.
.