After about a week of kicking it back and forth, she finally talked me into picking up the MLB.TV Premium service for the rest of the season. If tonight's game was any indication, between the Padres and the Pirates, why did I wait so long to get it?

I liked the fact that I was able to pick up the San Diego broadcast, rather than have to listen to Pittsburgh's "homers." The audio was great, while the video came across wonderfully in High Definition. I also like the fact that I can watch these Padres games wherever I'm at, since I can pick them up on my IPhone and on my android tablet.

And it absolutely helped that the Pads won the opening game of their three-game series at PNC Park. Andrew Cashner was in total command, winning 2-0 on only 97 pitches (67 for strikes).

What made the game even more awesome, was the fact I witnessed Cashner make Padres history on my computer.  Not unlike a few Padres pitchers, Cashner had a no-hitter going into the later stages of the ballgame. Like many Padres pitchers, he lost it in the bottom of the seventh inning, when LF (and lead-off batter) Jose Tabata singled on a ground ball to right field.

However, that would be the only hit the Bucs would get, as Cashner recorded the Padres' first ever complete game win, while facing the minimum number of batters (27). 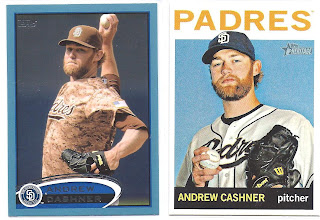 It was in my very last post that I mentioned how, in his last 10 games, Cashner sported a 2.78 ERA and a 4-4 record, despite the lack of run support provided by the Friars when he takes the mound. After tonight, he's now 10-8, with a spiffy 3.21 ERA for the season.

As for MLB.TV and my computer, I think it's going to be a match made in heaven. And, it's all thanks to my loving wife. Hoo-Hoo!
Posted by Comatoad at 7:27 PM