It's very seldom I actually get surprised. Once you spend enough time in the military (and public affairs) realm, you develop a strong sense of "situational awareness" about what's going on around you. You're prepared for anything, reacting instinctively, rather than having to stop and figure out what you're going to do.
But I have to admit, I was totally blown away when I got home this past Tuesday and found a box on my front doorstep, too big to fit into the mailbox.
It was from Portland, Ore.,  and another Padres blogger, Rod, from Padrographs: From Abner to Zimmer.
In the intro to his site, Rod state's hes "a Navy brat who went to 10 schools in 12 years in 4 different states. I have lived in 7 different states. I read two or 3 books a week. I manage a used bookstore for the county library system."
What Rod doesn't mention, is the fact his generosity is boundless. Rod is often spoken of with reverence among Padres bloggers, for his legendary gifts of Padres goodies. There's a running bet that he owns every Padres card that's ever been printed.
So, on Tuesday, it was my turn to be stunned by Rod's benevolence. By the time I was done going through everything in the box, I was totally overwhelmed by its awesomeness. If I can paraphrase Roy Scheider's line from the movie "Jaws," "I think I need a bigger blog." 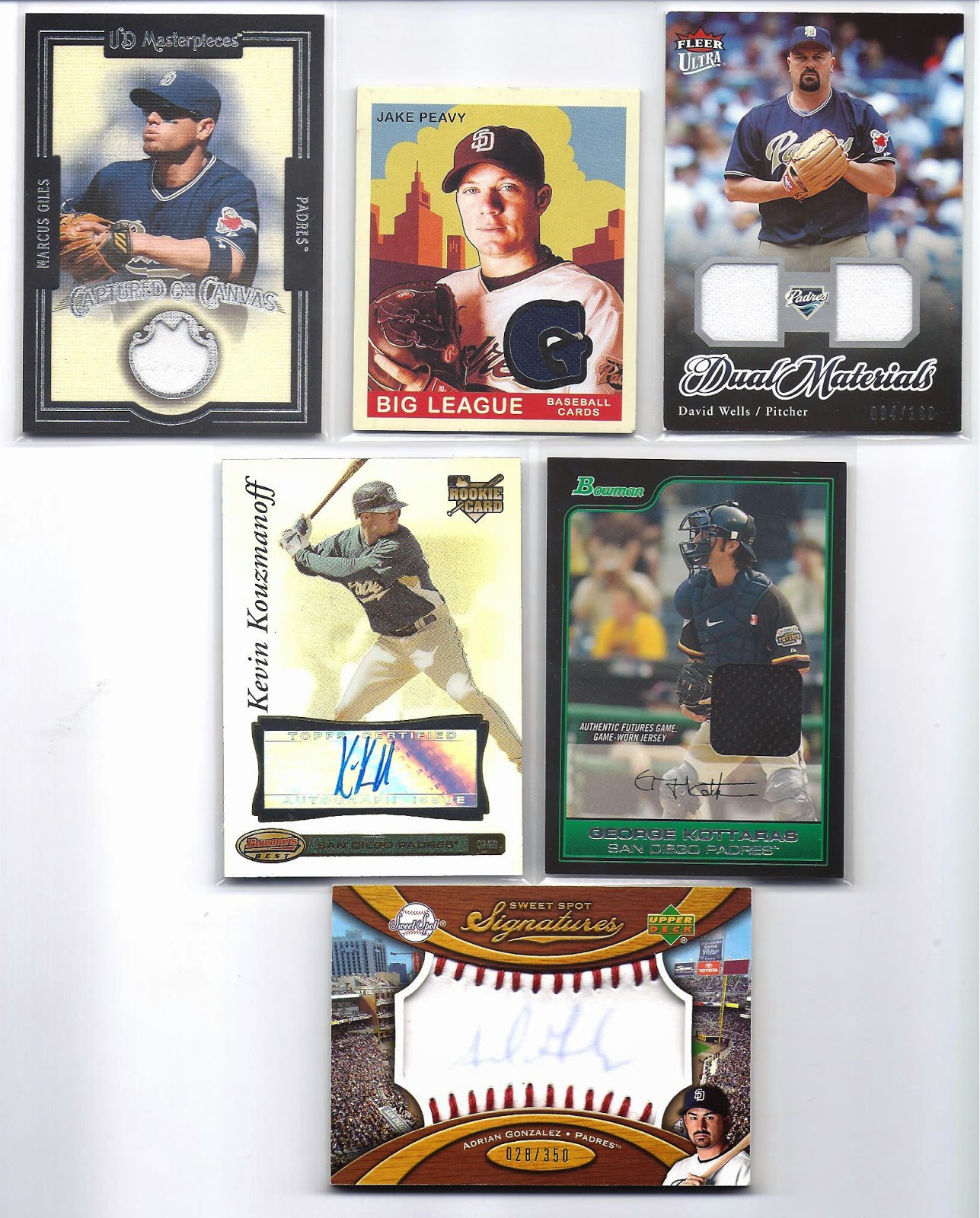 There's no better place to start, than with this group of game-used and certified auto cards. They include a 2007 UD Masterpieces on Canvas Marcus Giles, 2007 Upper Deck Goudey Memorabilia, 2007 Ultra Dual Materials David Wells S/N 94/160, 2007 Bowman's Best Autograph Kevin Kouzmanoff, 2006 Bowman Draft Futures Game Prospects Relics George Kottaras, and a 2007 Sweet Spot Signatures Red Stitch Blue Ink Adrian Gonzalez S/N 28/350. While I have at least one, 1/1 printing plate in my Gonzalez collection, I haven't owned a single autograph card of this native San Diegan. But now, thanks to Rod, I finally have one. (And a rather sweet one at that - pun intended). 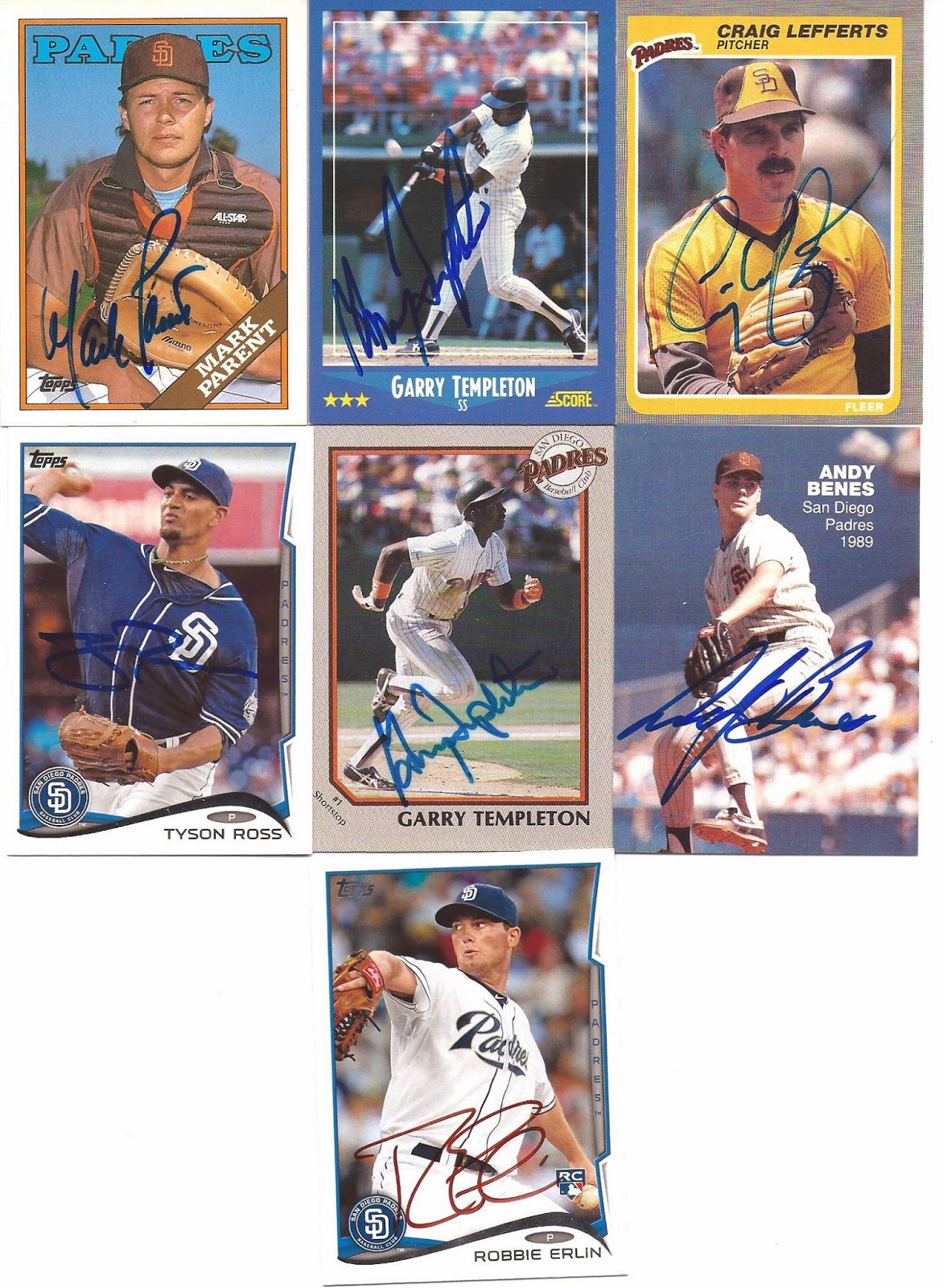 Being how Rod collects Padres signatures, "From Abner to Zimmer," what were the chances he'd include a nice group of hand-jammed, in-person, Padres autographs like these? This is a very fine collection of Padres players, both past and present, using a variety of pen colors. There's a Mark Parent signature, as well as Garry Templeton, Craig Lefferts, relative newbie Tyson Ross, Andy Benes and relative newbie Robbie Erlin. Very nice! 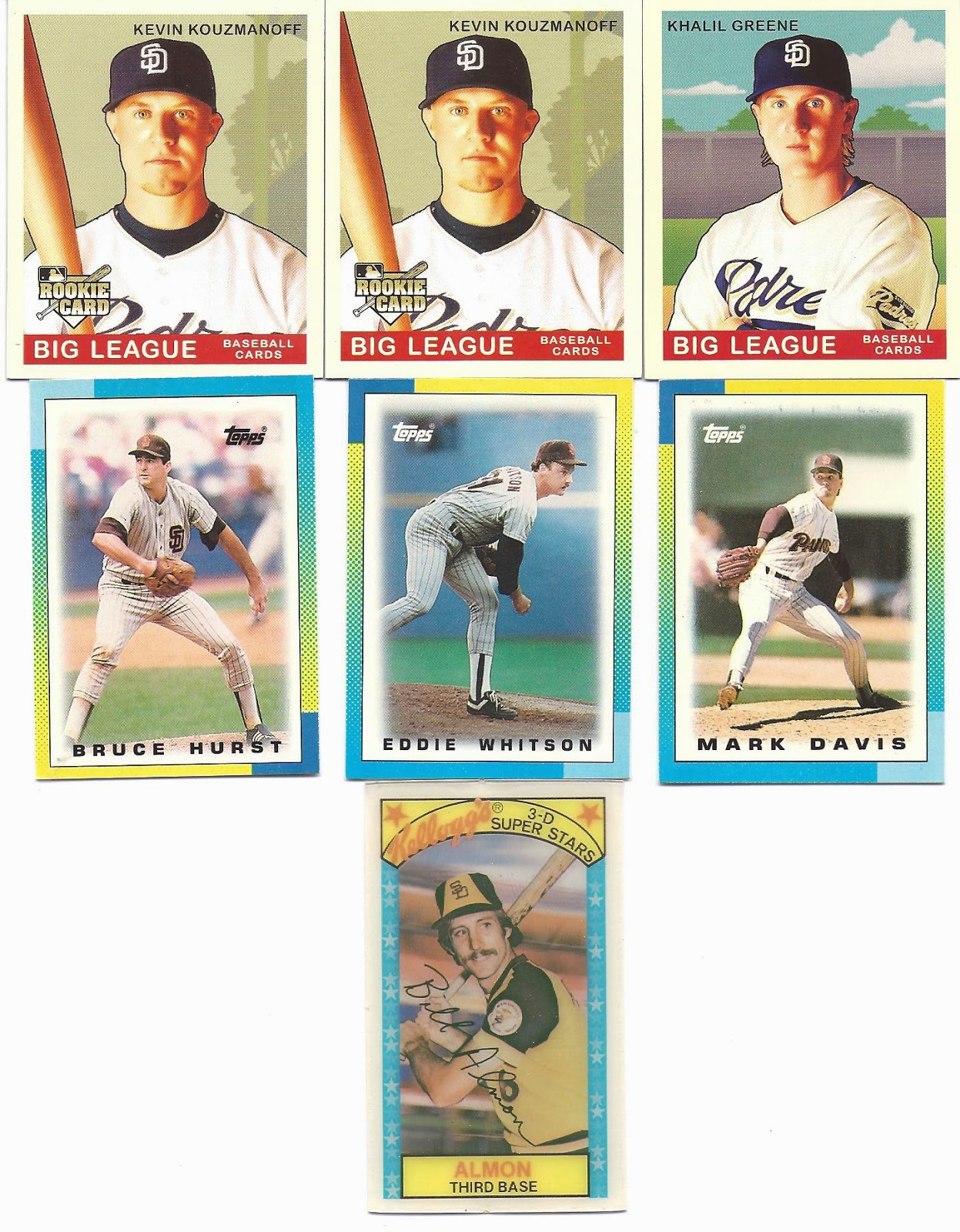 Here's another group of cards smaller than your standard 2-1/2 x 3- 1/2 pieces of cardboard. Kevin Kouzmanoff leads the way with his 2007 Upper Deck Goudey and 2007 Upper Deck Goudey Red Backs, followed by a 2007 Upper Deck Goudey Red Backs Khalil Greene, 1990 Topps Mini Leaders Bruce Hurst, Eddie Whitson and Mark Davis, and 1979 Kellog's Billy Almon #53B.
I was just mentioning these Kellogs cards and the lenticular printing process used to create them in my last post. The cool thing about this Almon card, is there were two versions - #53A, which incorrectly listed his career doubles through 1978 as "31," and this #53B card, which has his doubles correctly listed as "41." 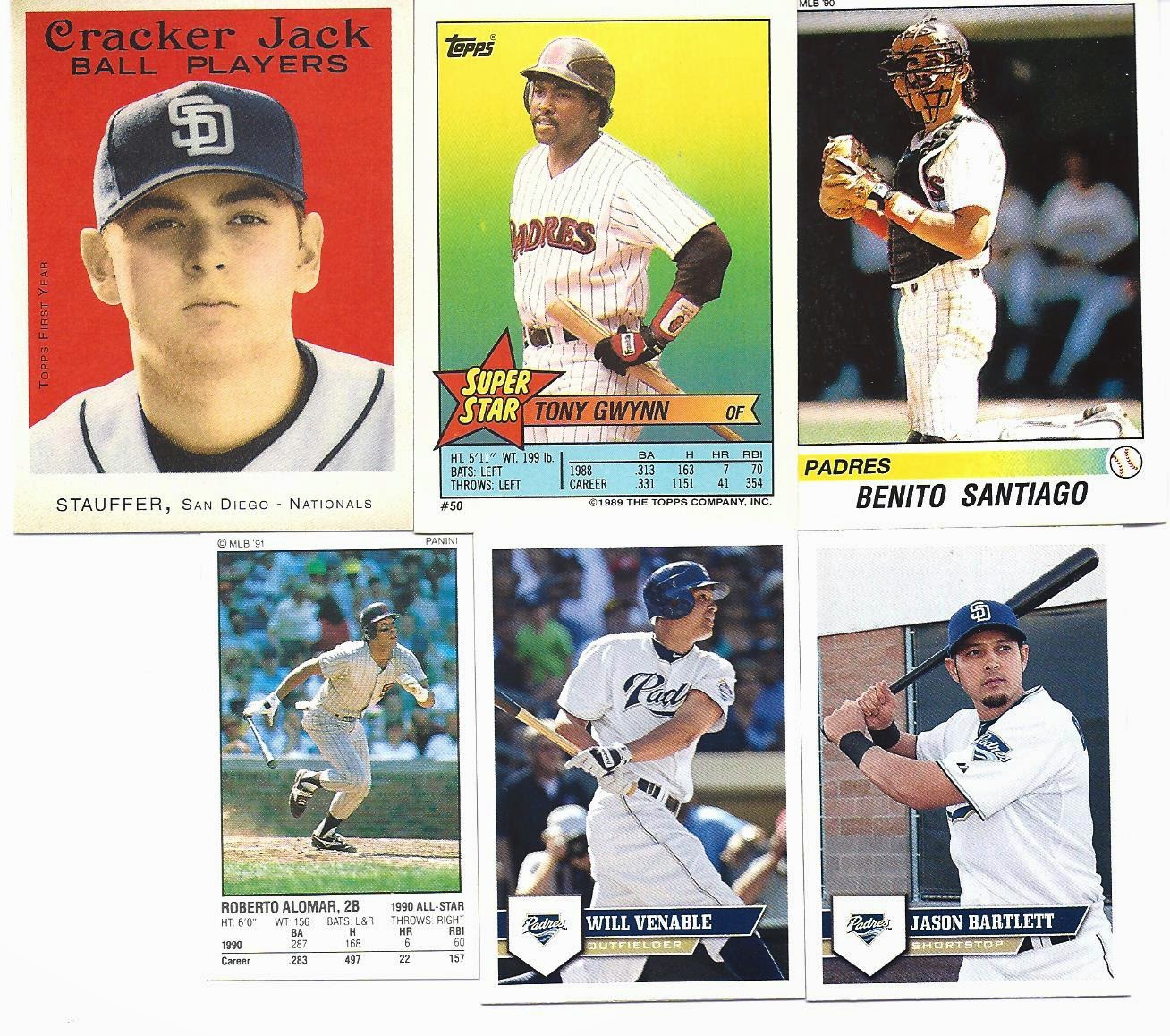 And then there was this nice stack of stickers, which I don't have very many of in my Padres collection. Now, thanks to Rod, I can boast of having a 2004 Topps Cracker Jack Mini Stickers SP Tim Stauffer, 1989 Topps/OPC Sticker Backs Tony Gwynn, 1990 Panini Stickers Benito Santiago, 1991 Panini Stickers Roberto Alomar, and a 2011 Topps Stickers of Will Venable and Jason Bartlett.
What can I say? I am truly humbled by Rod's generosity and I haven't the foggiest idea of what I have that can even compare to this awesome gift. All I can say is, "Thank you very, very, much Rod!"
However, there's still more to come. Like I said, "I'm going to need a bigger blog," just to show all the San Diego goodies Rod sent me.
Posted by Comatoad at 3:17 PM