Once more, I have to wax poetic about my local brick-and-mortar card stores, RyansCardz and The Rookie. While I lvoe the iinternet and tradiing, where would we be without our local card shops?

If I want to pick up non-winning bid board cards, it's The Rookie. The Rookie also appeases my hockey fix, as well as 50 cent inserts, numbered, and other nice cards. While I always hit my Pads up first, I usually find some really nice traders to share with my other blooger buddies.

When I'm looking for dime box goodies, however, it's RyansCardz, all the way. After getting off work early, I swung by RyansCardz and lo and behold, he had six new, 5,000 count boxes of baseball cards he picked up during his recent travels. To top it all off, on this particular day, you could fill a 200-count box for $5.

Among the many goodies I found..... 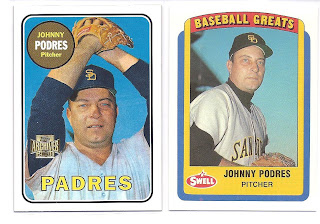 Yes, Johnny Podres was a Padre. He signed with the Friars in March 1969, as a free agent after being released by the Detroit Tigers two yerars previously. Despite the fact he was in the waning days of his career, he won five games in San Diego's initial season. His final game was as a Padre, pitching a scoreless eighth inning in a 4-0 loss to Houston on June 21, 1969. Even though they're reprints, I'm happy to have found them, since these are the first Podres Padres cards I've been able to accumulate. 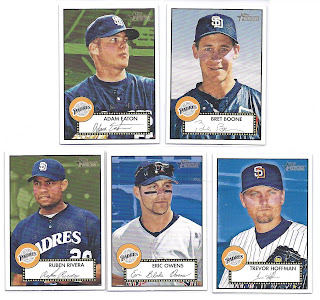 From 1991-2004, Studio has produced some of the most interesting photography and card layouts on the market. While I was never a huge Brian Giles fan, you have to love the San Diego background of his 2004 Studio card. The 1993 Andy Benes Studio card is nice, especially with the huge Padres jersey as a backdrop (love that color scheme, although not as much as the brown and gold), and the 1994 Derek Bell isn't half bad, either.

San Diego Padres old and new. Let's start out with Kevin Caminit's 1996 Flair. Caminiti has always been one of my favorite Padres. Despite having played for the Astros, I feel his best seasons were as a Padre -- named the 1996 NL MVP (after batting .326 with 40 home runs and 130 RBI), a 3-time All-Star and earning 3-straight Golden Gloves. It was 17 years ago this month, he completed his "infamous" Snickers game in Mexico. Unfortunately, Caminiti left us all too soon in 2004.
Even though it's kind of "busy," I still like Jeff Tabaka's 1995 Fleer card, with its mini images and information. Tabaka was a pretty forgettable Padrs, pitching for the Friars and compiling a 3-1 record, with a save in 1994,-before compiling a .711 ERA in 10 games in 1995, before being traded to Houston with RIch Loiselle for Phil Plantier. What's there not to like about Jedd Gyorko? Since starting opening day, all this West Virginia Mountaineer has done is lead all MLB rookies with 16 home runs at the end of August, and compiling a .254 batting average, with .752 OPS in 350 at-bats., .

And finally -- what a great way to close out this blog -- Goose, Garvey and Perry. Gaylord Perry pitched for the Pads during my time in San Diego, so I was more than happy to find this 1993 Ted Williams card. The Goose, complete with the 'fu, is a great card to have, and I always enjoy finding food issues cards, so grabbing this 1987 Burger King card of "Mr. Clean," was a no-brainer.
I always try to hit these two shops at least once a week, depending on what my allowance is. Another great thing about RyansCardz, he helps put together local card shows, and this Sunday, the Urbandale American Legion will have its monthly show. Rest assured, I'll be there. While I can't wait to see what kind of Padres finds I can obtain, I always enjoy keeping a lookout for my blogging buddies.
Posted by Comatoad at 1:19 PM