To no one's surprise, C Austin Hedges has been tearing up the Arizona Fall League. He's the second leading batter for the Peoria Javelinas, hitting .364, with six RBIs, four strikeouts and three walks in 22 at bats. even more impressively, he's also thrown out seven of 10 basestealers so far in six games.

Hedges played most of the 2013 season at Class A Lake Elsinore, hitting .263 with one triple, three home runs, 21 doubles and 26 RBI in 66 games for the Storm. lsinore. He was promoted to Class AA San Antonio, whre he hit .24, with eight RBIs in 22 games.

He capped off the regular season by receiving the 2013 Captain's Catcher Award by Baseball America. It's awarded annually to the catcher who displays strong defensive qualities including leadership, dedication, the ability to call a game, blocking and receiving. Statistically, Hedges threw out 32 percent of basestealers in 179 minor league games.

While it may be a few years before Hedges makes it to the bigs, I'm curious where C Rene Rivera is going to shake out next season.

Originally a second-round draft pick of the Seattle Marines, Rivera bounced from the Mariners to the Dodgers, Mets, Camden Riversharks, Yankees  and Twins before the Padres signed him to a minor league contract on Dec. 12, 2012. In July, he was called up from AAA Tucson to replace Yasmani Grandal who suffered a season-ending knee injury. Backing up Nick Hundley, Rivera hit .254 with seven RBI and four runs in 23 games.

I was fairly impresed with Rivera as he backstopped Tucson when they played here in Des Moines. 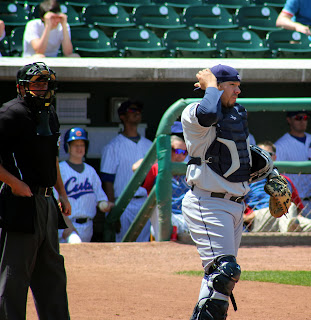 I can see the Pads keeping Hundley and Grandal next season. Despite Rivera appearing to be a mere journeyman catcher, I can see basically only one scenario where the Pads keep him up in the bigs, and that would be if Grandal doesn't bounce back from his knee surgery. Otherwise, San Diego could either carry three catchers (doubtful), or use Grandal as possible trade bait (even more doubtful, even if he were to come back completely from knee injury).

As I've stated before, the off-season should prove pretty interesting for the Padres..
Posted by Comatoad at 9:26 AM