Over the weekend, I did something interesting....I dumped my entire "My Two Tonys" box onto the floor. You see, I have a 2,000 count box in which I keep my Tony Gwynn and Tony Esposito cards, incuding duplicates. I was putting some other cards away in my hobby room, when I bumped the box with my elbow, and viola, I had to play a modified game of 52-pickup!

What made it so bad is, I had each of my Gwynn and Esposito cards divided by year, and then in alphabetical and numerical order.

I have to admit, however, that I did enjoy perusing my Tony Gwynn collection again, since it's been a while since I've actually added anything to it. It's been pleasantly surprising to see what Gwynn cards I actually have.

For example....how about his 1982 Hawaii Islanders TCMA card. 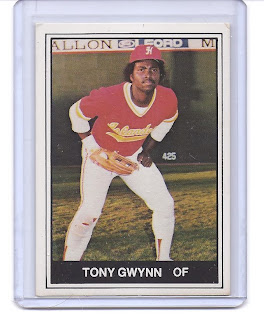 In 1982 Gwynn played 93 games for the AAA Pacific Coast League, Hawaii Islanders, hitting .328 in 366 at bats. He also had minor league stops in Walla Walla (Class A, Northwest League, 1981) and Amarillo (Class AA, Texas League, 1981). He played for Las Vegas, San Diego's new AAA affiliate in 1983, just before being called up to San Diego, but this was his only minor league card. 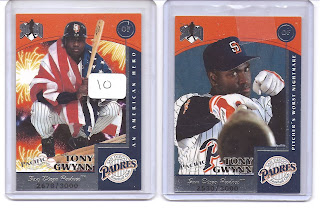 How about these two 1999 Pacific Omega Gwynn Cards, No. 8 and 6? The first one, numbered 2678/3000, is entitled, "An American Hero." I think it may have been a little more appropo for the flag to be in the background (instead of the fireworks), rather than around his shoulders. But then, that's just me. The second card, numbered 2530/3000, is aptly entitled, "Pitcher's Worst Nightmare." Even though it's a posed shot, you can definitely feel the attitude, as you look down the barrel of the bat. One thing I loved about Gwynn was his humility. It was great when he and Ripken were inducted into the Hall of Fame together. It was justly deserved, as those were two players who played the game the right way! 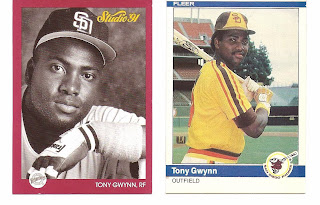 I've always enjoyed the Studio series and Gwynn's 1991 Studio #245 is no exception. To me, this is the quintessential Gwynn pose, the boy next door. As far as his 1984 Fleer #301 card goes, what can I say, I love the old yellow and brown uniforms.
I have to admit, I have rather enjoyed reorganizing my Gwynn cards while taking a stroll down memory lane. Who knows, maybe I'll pull them out later and give them another loving look.
Posted by Comatoad at 8:22 PM