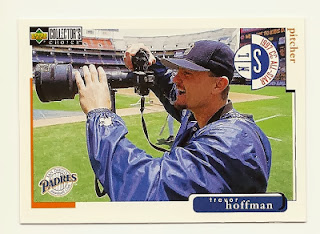 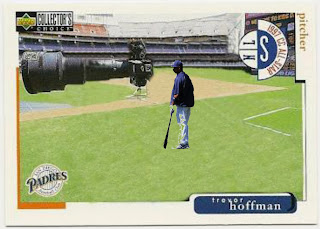 Last month, the Padres named Trevor Hoffman as their newly-created "Upper Pitching Coordinator" and "Special Assistant to the General Manager." The former all-time saves leader will now evaluate and coordinate pitchers at the Double-A, Triple-A and major league levels.
“Trevor will be a key part of finishing the development of our younger pitchers,” said Padres general manager Josh Byrnes. “His expertise, passion and communication skills will undoubtedly impact this critical area for us.”
Byrnes might be more on the money about Hoffy than he thought.
I've always considered Hoffman a "Thinking man's pitcher." While he had a rather impressive fastball up until his 1994 injury, he developed an intimidating change-up which proved to be equally devastating.
You can just imagine Hoffman in his new position, scouting the Padres pitchers and perhaps taking pictures of those pitchers, as pictured on this 1998 Collector's Choice card #222.
However, I see Hoffman in an entirely different role -- as Ninja Hoffy.
Anyone can be a coach. However, with his newly added Ninja skills, Hoffman can easily transition into stealth mode, appearing almost invisible as he observes and perhaps photographs his young charges.
Think of the scouting reports...If you can't see him, is he actually there? The camera never lies.
As a matter of fact, Chuck Norris has nothing over Hoffman.
Tervor Hoffman and Superman once got into a pitching contest to settle a bet. The loser had to start wearing his underwear on the outside of his pants.
Trevor Hoffman doesn't read books. He stares them down until he gets the information he wants.
Trevor Hoffman once got bit by a rattlesnake. After three days of pain and agony, the rattlesnake died.
Outer space exists because it was afraid to be on the same planet facing Trevor Hoffman.
Beware, young Friars. Trevor Hoffman is coming!
(Blogger note: This particular blog is part of Nacho Grande's Blogger Bracket Challenge. Please go to http://fanofreds.blogspot.com/2013/10/blogger-bracket-challenge-round-0.html and vote for Comatoad in Group G in Round 1.).