Are you ready for the....El Paso Chihuahuas?

A few years ago, Portland, who once hosted San Diego’s AAA affiliate for 10 years, decided to turn to the dark side, ousting the Padres for a professional soccer team. Then-Padres owner Jeff Moorad bought the team, parking them in Tucson while he tried to get a stadium built in Escondido. When that plan went belly up, he sold his controlling interest in the team to a group of El Paso, Texas investors.


After three -years of San Diego AAA baseball in the warm, Tucson sun, the Padres have now relocated to El Paso.
So, with a new team and a new location, a new identity and colors were needed.


Amid great fanfare and a tighter security system than that offered by the U.S. government, the El Paso ownership group announced the new team’s name – are you ready for this? – The El Paso Chihuahuas. 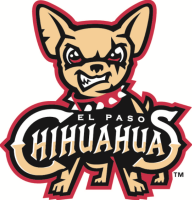 The Chihuahuas. Really?
Apparently, names such as the Aardvarks, Buckaroos, Desert Gators, Sun Dogs, and of course, Chihuahuas were all in the running. However, it was the entry of one Shae Vierra who was “chosen at random” in the “name the team” contest, according to an El Paso press release. Vierra will now get season tickets, a personalized jersey and the opportunity to throw out the ceremonial first pitch at the team’s inaugural home game.

I’m sorry, but “The Fighting Chihuahuas” doesn’t strike me as a name that will strike fear into Pacific Coast League foes. I can understand teams wanting a completely different identity from their parent club, all the better to generate their own revenue stream by hawkingT-shirts, ball caps, and anything else they can print up to sell their team logo.

But the Chihuahuas? Really?


“I’m sure I’m going to be hearing all sorts of views, but we’re standing by this,” El Paso General Manager Brad Taylor told MiLB.com. “We have friends in a lot of other places, like the Iron Pigs or the [Fort Wayne] Tin Caps, who stepped outside of their comfort zone to create a brand. That’s what we’re doing here.”
I can just see some of the pomos now – Bring you Chihuahua to the ballpark night, with everyone carrying pooches in purses like Reese Witherspoon in “Legally Blonde.”


I guess it has to better than the “Swing of the Quad Cities,” the monicker the former Quad City River Bandits claimed a few years ago, with its teal blue and burnt orange colors. Thank goodness, it didn’t last too long, before the team was sold, with the owners returning to the River Bandits, only a little more updated.

Now that, my friends, is a logo.