Sunday was one of those days where I felt like I was in a scene from the movie "The Blues Brothers."

"It's 106 miles to Chicago, we got a full tanks of gas, half a pack of cigarettes, it's dark and we're wearing sunglasses.
"Hit it"

In reality, I don't smoke, and it was actually 11 a.m. But, at least, I was wearing my sunglasses.

I was stoked - it was time for the monthly Urbandale American Legion Card Show.

Whenever I go to this show, I'm always looking for sweet-looking San Diego Padres cards, as well as goodies for my brethren bloggers. Of course, being its now December, I'm also looking for special cards for Christmas gifts.

As usual, I was more than happy to find a plethora of Padres at the monthly show.

I'll begin with the gaggle of Garvey cards I found. 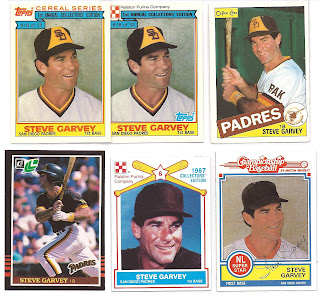 Leading off is a pair of 1984 Topps, the first for Topps Cereal and the other for Ralston Purina (according to my brother, who works for Purina, it's no longer Ralston Purina, but rather Nestles Purina). Next is the 1985 O-Pee-Chee, 1985 Leaf/Donruss, a 1987 Ralston Purina and a 1984 Milton Bradley Steve Garvey. 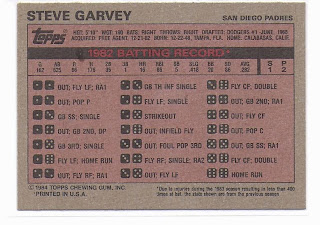 ﻿
That last card was part of a 1984 Milton Bradley game called "Championship Baseball," complete with 30 Topps baseball cards. Each card back featured a complete combination of any two dice rolls. Those rolls would then put the ball into play, resulting in a hit or out.

In case you were curious, there are plenty more Padres where those came from. 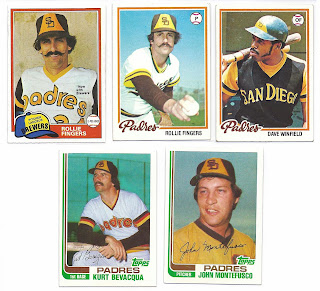 I don't care what you say, but the Fingers 'stache, as always, is awesome. Here's his 1981 and 1978 Topps cards (Rollie never suspected his teammates would super-glue the ball to his hand - I guess that's what happens when you sleep on the team bus). Dave Winfield is styling and profiling on his 1978 Topps card and Kurt Bevacqua and John "the Count" Montefusco bring up the rear on their 1982 Topps Traded cards. I tend to forget the Count wore the San Diego mustard uni for a couple of years. 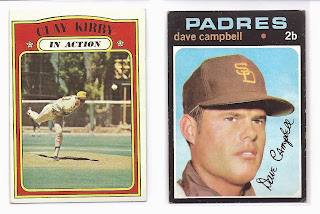 And finally, let's go old school with a 1972 Topps In Action Clay Kirby and a 1971 Topps Dave Campbell. Kirby was the Padres' 12th pick from St. Louis in the 1969 expansion draft and was the first Padre pitcher to come close to throwing a no hitter. Trailing 1-0, in 1970 against the Mets, he was pulled in the 8th inning for pinch-hitter Cito Gaston. The Mets won 3-0. Ever since, no Padres pitcher has ever thrown a no-hitter. For that matter, no Padre batter has ever hit for the cycle.