I noted in my last post that Sunday was the Urbandale American Legion Monthly Card Show, and as usual, I was searching for a cornucopia of cards of my precious Padres. Once more, Urbandale didn't disappoint. The dealers were definitely in the holiday spirit, as I got a gi-normous group of great deals for the Christmas season.
Do you like your cards shiny? 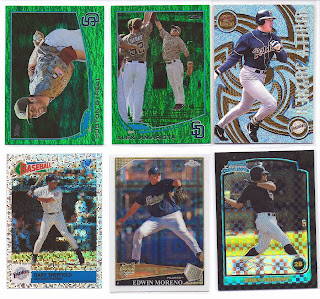 How about a pair of 2013 Topps Update Emeralds, one for closer Huston Street and 2B elf Alexi Amarista (maybe not quite an elf, but he's only 5-8). And then there's a 1998 Revolution Wally Joyner, followed by a 1993 Panini Stickers Gary Sheffield, a 2009 Topps Chrome X-Fractors Edwin Moreno and a 2003 Bowman Chrome X-Fractors Brian Burgamy (no relation, of course, to San Diego newsman Ron Burgandy).
How about some cool-looking cards? 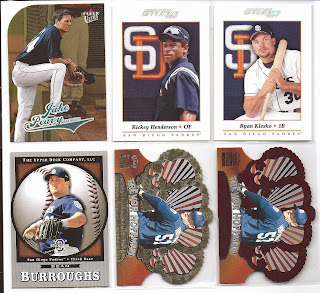 To me, each of these cards were cool, each in their own special way. For example, I've always liked Ultra Gold Medallion, and this 2004 Jake Peavy, with its die-cut, rounded corner, is no exception. Donruss' Studio line of cards have always had exceptional portrait photos, often with great backgrounds. The over sized "SD" logo looks sharp against the blue backgrounds of Rickey Henderson's and Ryan Klesko's 2001 cards. Having a huge baseball as a background also works, as seen in Sean Burrough's 2003 Upper Deck Standing "O" card. And finally, what better card company than Crown Royale for a card of Padre royalty, namely, Trevor Hoffman. The first card is his 2000 Crown Royale standard issue, while the second is the Crown Royale Red parallel.

Whether they belong to a major league or minor league Padre, I like autographs. To me, autographs are a more personal representation of that player than your basic game-used card. These three autos belong to a 2011 Donruss Elite Extra Edition Franchise Futures Signatures Kyle Gaedele (#316/1264), and 2007 Just Rookies Autographs of C Mitch Canham and OF Danny Payne. Gaedele, a sixth round pick in 2011, played in the High A California League for Lake Elsinore last season. Canham was drafted 57th overall in 2997 by the Padres, and after four years in the Friars' minor league system, he now toils in the Royals farm system. Payne, meanwhile, a supplemental first round Padres pick in 2007, made it all the way the AAA Tucson in 2011, before being released in March 2012. Payne is now Director of Operations for the Georgia Baseball Academy.
Let's close out with a pair of 2004 Leaf Certified Materials - one an autograph, one game-used, both serial numbered. 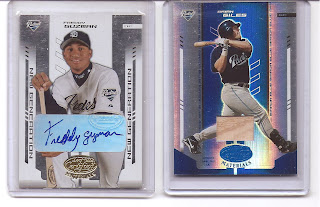 Freddy Guzman's auto card is serial numbered #319/500, while Brian Giles' Mirror Bat Blue card is numbered #36/50. I know I mentioned how I'm not that big a fan of game-used cards, but it was such a good deal, coupled with a low serial number, I couldn't help myself.﻿

(SPOILER ALERT) Christmas is the season for giving, and indeed, 'tis better to give than receive. I found more great deals than I could shake a stick (or a candy cane at) during my three-hour stay, so don't be surprised if you find a Christmas card in your mailbox.
Posted by Comatoad at 7:26 PM