“What is a man, if his chief good and market of his time be but to sleep and feed? A beast, no more. Sure he that made us with such large discourse, looking before and after, gave us not that capability and god-like reason to fust in us unused.”
William Shakespeare, Hamlet

The world at large is based with talent and potential, especially in the world of athletics. You have some athletes with God-blessed power, such as Matt Bush or Ryan Leaf, who've wasted that potential through narcissistic self-indulgence.

And then again, there are the athletes such as former Padre Drew Cumberland, whose body has sadly betrayed the pursuit of that potential. 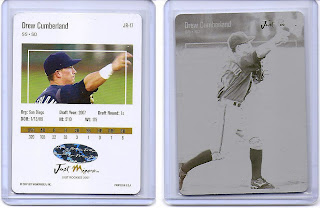 I recently picked up this Just Minors printing plate of Drew Cumberland off E-Bay. I wasn't too familiar with this four-year, career minor leaguer, but he was a Padre, so I did a little research.

The Padres thought highly enough of him to make Cumberland the 47th pick in the 2007 draft and he flashed that potential the Padres saw in him. In 2010, he was selected as the Padres' MiLB.com Organization Al-Star, a California League Mid-Season All-Star and Player of the Week, and was chosen for the Futures Game. Baseball America ranked the shortstop as the Padres' ninth best prospect entering the 2011 season.

However, one year later the Florida native voluntarily retired from baseball in March 2012 at the age of 23. He hit .350, with seven homers and 41 RBIs during his minor league career, with an .890 OPS.

Cumberland had a few concussions, his first coming as a freshman tailback at Pace (Florida) High School. I've had a few concussions in my day, so I know they're nothing to joke about, but that alone may not have been the cause. If you combine them with a rare neurological condition known as bilateral vestibulopathy, then the blurred vision. severe headaches and dizziness may have been more than he could cope with. Bilateral vestibulopathy is where portions of both inner ears, which control your balance, are injured.

He was offered a coaching position with the Midwest League's Fort Wayne Tincaps, but looking at their current staff on the Padres website, I don't see him listed, so I'm assuming he's moved on to other things.

At 24 years of age, what do you do when your body betrays your dreams?
Posted by Comatoad at 8:18 AM