I may be dating myself, but I remember when every Wednesday, like clockwork, NBC broadcasted Rod Serling's Night Gallery from 1970-73. Following his successful Twilight Zone series (and unsuccessful The Loner series), Serling produced more than a third of the scripts and Steven Spielberg even produced a couple of the segments.

Set in a dimly lit museum, Serling, who also served as the on-camera host, would introduce three tales of the macabre, unveiling canvases or sculptures that would appear in the subsequent story segments.

“Good evening, and welcome to a private showing of three paintings, displayed here for the first time. Each is a collector’s item in its own way — not because of any special artistic quality, but because each captures on a canvas, suspends in time and space, a frozen moment of a nightmare.

"Welcome, Ladies and Gentlemen," Serling would say, "to the Night Gallery."

While I enjoyed Night Gallery (not as much as the Twilight Zone, however) the concept of the show, as well as the introductions, proved to be quite interesting.

With that eerie tune from Night Gallery playing in the back of my mind, let me introduce you to a few of the more interesting items in my Padres collection.

Good evening art lovers. I'd like to take you on a conducted tour of this most bizarre little salon, this Collection de Duff, where you'll find the awesome, the esoteric, the unique.

Welcome to our exposition, where we present for your judicious contemplation a surrealistic manifestation of athletes involved in one of our most cleansing forms...Water. Water, one of the four elements in ancient teachings and which serves many esoteric purposes. Tonight we witness one of its most basic applications. You can boil it, freeze it or steam it. You can bathe in it, clean with it, and even drink it.

In any case, for those of you who take their pleasures dancing around a whistling teakettle in solemn circumstance, we dedicate the following sports collectible, we call, "Tea with Tony and Benito." 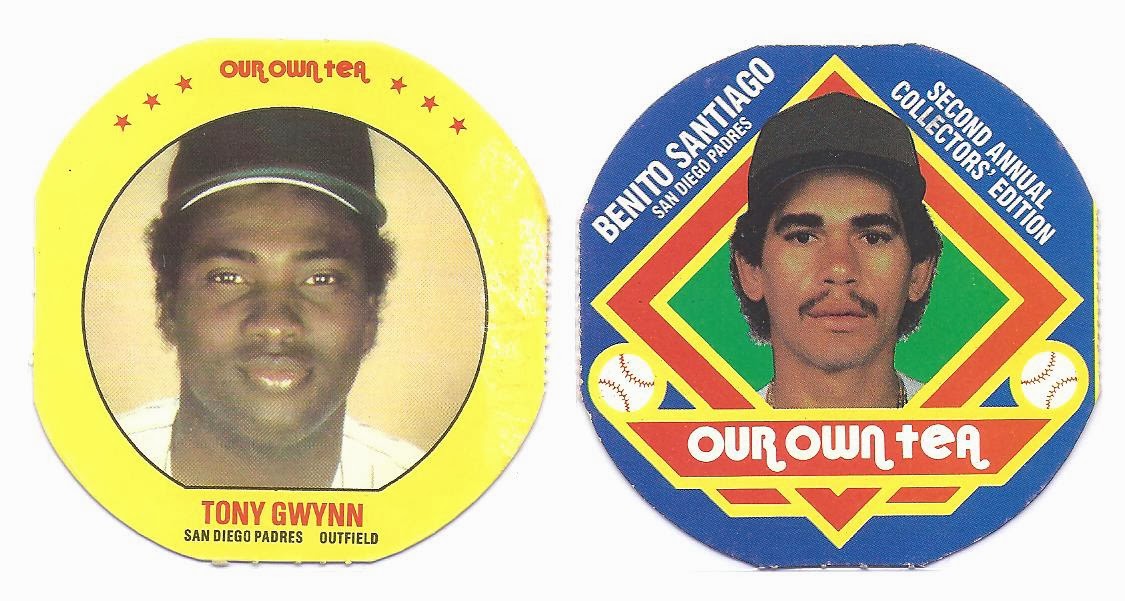 Our Own Tea discs consisted of three panels, two with player pictures and one with advertising featuring "Two exciting baseball offers." There are only two Padres who have been featured on these discs, the 1987 Tony Gwynn and 1988 Benito Santiago discs pictured above. While Santiago was also featured on the 1989 version of the Our Own Tea discs, only 20 player discs were issued for each of those sets for each of those years.

Our second offering, is a small, little-known item, embellished in whites, browns and greens. Marsupials, an infraclass of mammals, live primarily in Austrailia. One distinctive characteristic, however, common to this particular species, is the fact the young are carried in a pouch. This rather unique little item is no different. Offered to you now is a bizarre little piece of cardboard, entitled "The Card-Supial." 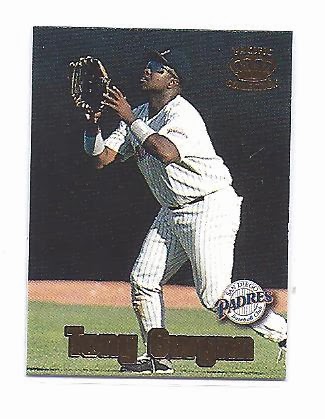 When Pacific released its 1997 Pacific baseball set, inserted one in every 37 packs was either a regular-sized Card-Supial card, or a mini Card-Supial, measuring 1-1/4" x 1-3/4."  The minis and the regular cards shared the same action shot on the back  and are numbered "x" of 36. Each card front featured a gold-foil Pacific logo and the player’s name printed on the bottom edge. The team logo appears in the lower right corner.
The regular-sized cards also came with a pocket or "pouch" on the back, which the mini card would slide into.  Once the mini card finds its home in its pouch, the pictures on the two cards combine into one seamless shot. This is Tony Gwynn's mini Card-Supial, card number 35, the next-to-the-last card of the series.
Our final piece from tonight's tableau, is yet another unique item found within the realm of our anthology. Here, offered to the gourmet who takes home cooking seriously, features the debut of a brand new venue located within the environs of downtown San Diego. For those of you who enjoy the visual delights of the first day of baseball season, we offer this piece of heaven and earth, entitled, "Opening Day at Petco Park." 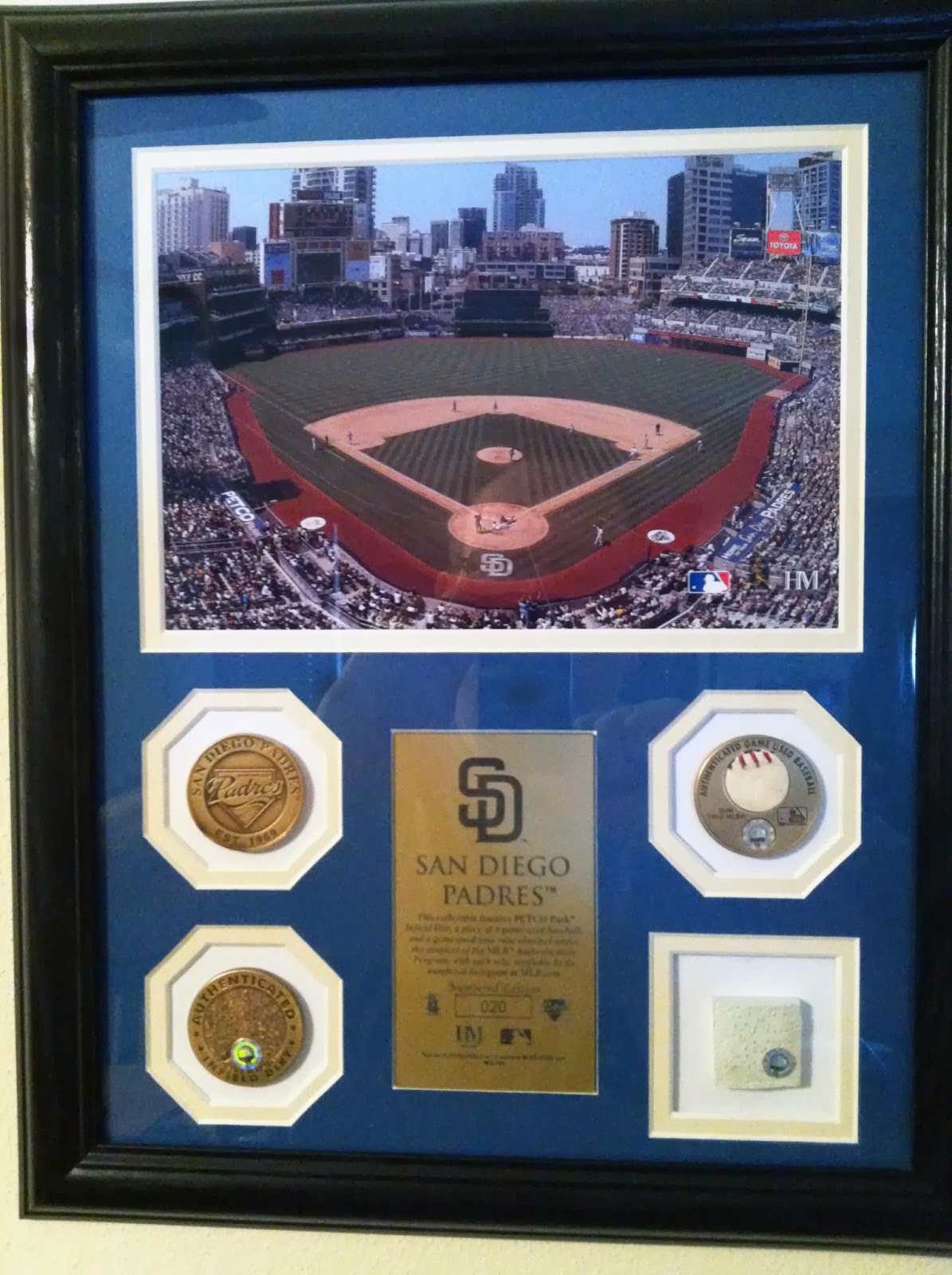 The last time we were in San Diego (Christmas 2011) we swung by the Padres gift shop at Petco Park and picked up a few souvenirs for ourselves, friends and family. As a result of spending X amount of dollars, we received, free at no cost, this display from the Highland Mint. As you can see, it safely made its way via the airlines back to Iowa.
Encased within the frame is a picture of Petco Park, a Padres coin (coins are a big deal to the military service member - remind me to show you my military coin collection sometime), a piece of infield dirt (lower left), a piece of baseball (upper right) and a piece from one of the bases (lower right), all from Opening Day and all authenticated. To top it all off, this piece is serial-numbered #20. It hangs above my desk at home, providing the carrot for our return to our West Coast "home."
Ladies and gentlemen, I hope you enjoyed your visit, to the Collection de Duff.
Posted by Comatoad at 12:12 PM