Dog days in Des Moines, EP drops 3 of 4 to Iowa

Last month, my wife and I were able to catch the complete four-game series when the Paso Chihuahuas came to town to play the Iowa Cubs. Besides being great seats - three rows above the El Paso dugout -- my wife was able to get the tickets free for all four games from a friend at work.

San Diego's top affiliate's annual trip to Des Moines is alway highlighted on our calendar, as it's our only time we can see the baby Friars in person. While we normally cheer for the hometown Cubbies for the rest of the Iowa games we attend, this is the one occassion a year where we're dressed to the T's in our Padres gear.

We also had a great bunch of Cub fans sitting around us, giving us a good-natured hard time as we rooted for the visiting team. That's what helps make the games so much fun is that friendly bantering.

Unfortunately, we got what we paid for this season. Despite getting to see Odrisamer Despaigne pitch before he was called up to San Diego, the Chihuahuas dropped three of four games against Iowa. I think the AA San Antonio Missions have all the Padres' talent this year, while the cupboards of the AAA team are pretty bare.

Game 1 (June 17) -- El Paso 8, Iowa Cubs 5. Padres win! Padres win! RF Jeff Francoeur goes 3-5, with a double and a RBI. 3B Jonathan Galvez posts three RBIs, 2B Brooks Conrad addrf a pair, and CF Alex Castellanos and PH Travis Buck each posted another. Matt Wisler, in picking up the win, retires 12 Cubbies in a row after giving up runs in the firt two innings. Sad to say, this game proved to be El Paso's best showing of the series.

Personal observations -- The game was supposed to start at 7:05 p.m., but as we walked up to the turnstyle at 6:30, the Padres team bus and equipment truck was just pulling up. For whatever reason, their plane was delayed coming out of Round Rock, Texas, their last away stand, so the game was delayed for a half hour. I have to admit I thought the Chihuahua's red jersey's looked pretty sharp, with the Chihuahua holding a bone behind his back. However, it would have been nice to see that vicious little Chihuahua logo on the cap rather than the tame, two-tier "EP." Casatellanos had a great game in center field, making a total of eight outs, many of them pretty impressive. 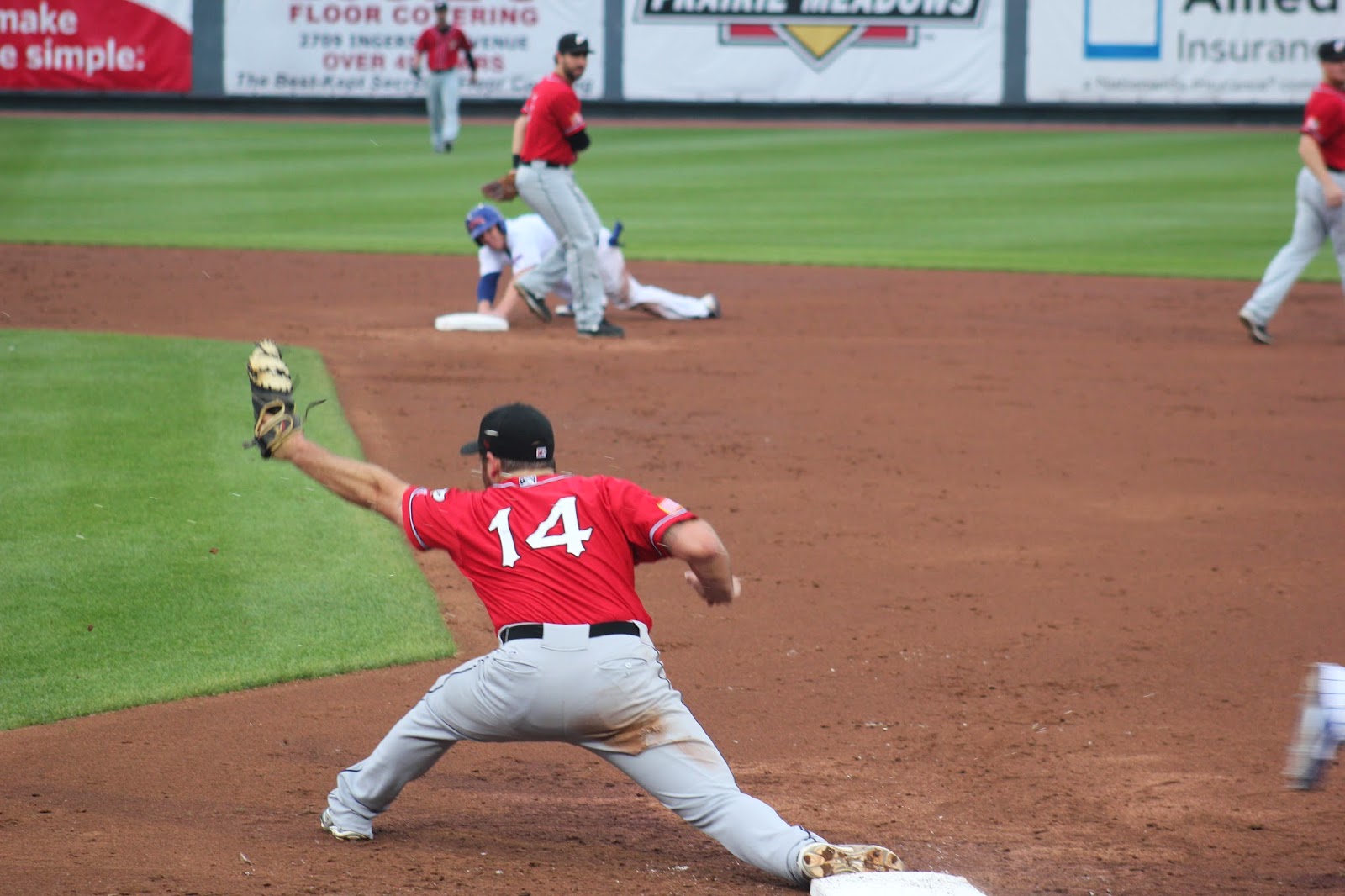 1B Cody Decker completes a double play after taking the throw from
2B Brooks Conrad.

Game 2 (June 18) -- El Paso 1, Iowa Cubs 3. Despaigne goes five innings, allowing three earned runs while striking out seven and walking two. The only Chihuahuas to get a hit were RF Alex Castellanos, 2B Brooks Conrad, C Adam Moore and Francouer, pinch-hitting in the ninth. The Chihuahuas threaten in the ninth, on two-out, Jake Lemmerman and Francoeur singles and a Castellanos walk. However, Galvez flies out to right with the bases loaded for the final out.

Personal Observations -- For the most part, tonight's black jerseys weren't too bad looking, other than having "Chihuahuas" (with a large first "C" and last "S") over the chest. They're still wearing the black EP hats. Despaigne looks like the real thing, with a wide variety of pitches. Too bad the Chihuahuas couldn't have given him a little more timely hitting and run support. I thought it'd only be a matter of time before he was called up to San Diego. Oh by the way, he threw a total of 98 pitches tonight, with 63 of them going for strikes.

Wore my Chihuahua T-shirt my boss gave me earlier this year and got a few compliments on that, as well. The funniest thing is when the Cubs fan in our section starts calling El Paso the "CHEE-hooah-hooahs." Gotta love it.

Game 3 (June 19) -- El Paso 2, Iowa Cubs 6. Tsuyoshi Wada six-hits the Padres, with C Adam Moore and P Nathan Lane getting the only Chihuahua RBIs. Not too much to say about this game. For Cub fans, getting to see Kris Bryant play (as well as rumors of Manny Ramirez making an appearance) was well worth it.

Personal Observations -- Tonight's game marked the first appearance of Cubs wunderkind Kris Bryant, who takes over as the I-Cubs third baseman. How'd he do? He hit a two-run homer in his fourth at-bat (he struck out and flew to RF in his first three). Trivia question -- Who was the pitcher Bryant got his first AAA homer off of? El Paso's Branch Kloess.

Wore my brown and orange Tony Gwynn jersey to the game and got a lot of compliments on it, as well as comments and sympathy for Gwynn's death and the fact there will never be another MLB player like him. 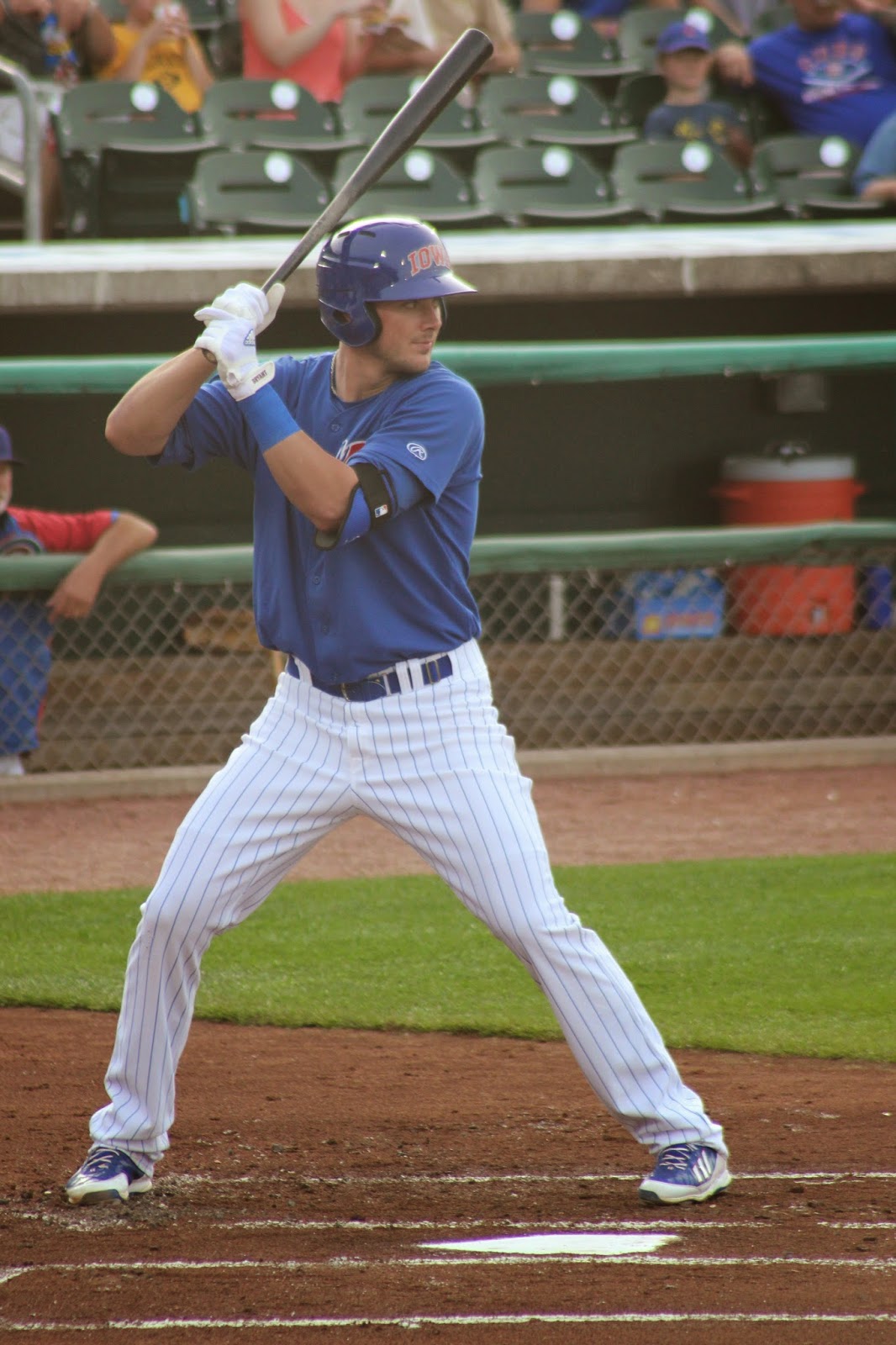 Iowa Cub 3B Kris Bryant
Game 4 (June 20) -- El Paso 3, Iowa Cubs 8. El Paso ran into a buzz-saw  in Cubs pitcher Kyle Hendricks. Kendricks retired the first 15 hitters on six ground balls, four flyballs and five strikeouts before surrendering a broken bat infield hit to Jonathan Galvez to leadoff the sixth. On the flip side, El Paso pitcher Donn Roach was his usual ineffective self, allowing six runs on eight hits and two walks in five innings. El Paso finally scored a run in the seventh and two more in the ninth, with the game well out of range. CF Castellanos continued hitting well, batting two for four with a pair of doubles and a RBI. SS Tyler Greene was also 2-4, with a pair of RBIs. 3B Jonathan Galvez and 1B Chris Nelson also added a hit.

Personal Observations -- How many road uniforms does El Paso have? Tonight they sported grey uniforms with "El Paso" across the chest. For my birthday, earlier this month, my wife got me a Padres Sunday Marine Corps camouflage jersey, with "McDuff" on the back of it. It's a close call as to which jersey I like better, the camo or the Gwynn brown and orange, but I think it's the Gwynn jersey, hands-down. 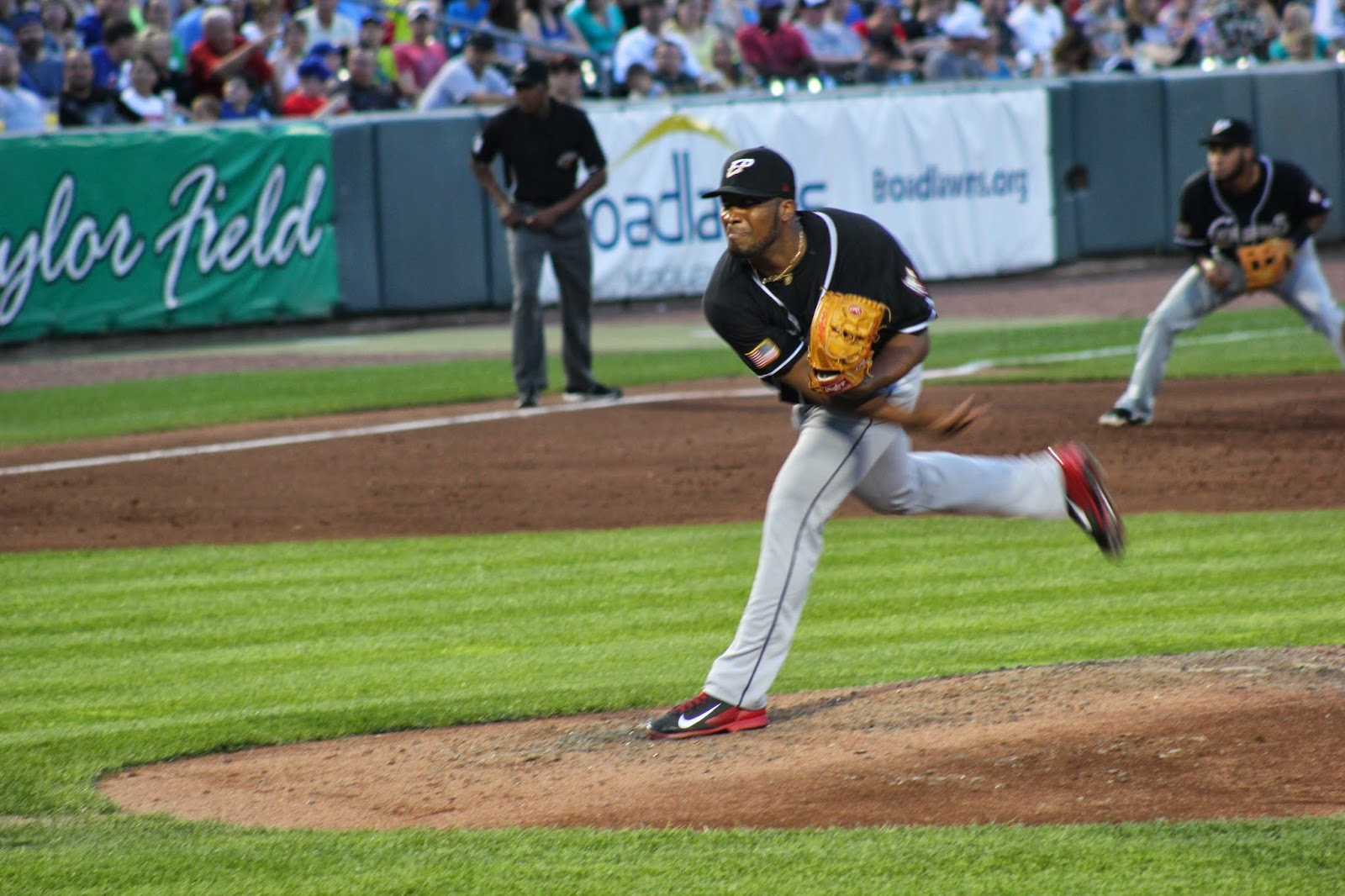 Keyvius Sampson comes on in relief of Donn Roach.
Sampson gives up two earned runs in two innings,
including a home run to 1B Logan Watkins.

The only great thing about this game, was the fireworks display, which the I-Cubs put on for every Friday home game.

What can you say about a series like this? The I-Cubs outscored El Paso 22-14 (only outhitting them 35-33), but powered five home runs to El Paso's solo dinger. While the Chihuahuas headed out of town with their tail between their legs, I've said it before and I'll say it again, I think most of the Padres' minor league talent is located deep in Texas at San Antonio.

It may just be a long season for the AAA affiliate.
Posted by Comatoad at 4:47 PM