Well, I was finally able to make it to RyansCardz to pick up my Padres cards.

If you remember, one of my local brick and mortar card shops was breaking open a six-box case of 2013 Bowman Platinum Baseball. Each MLB team was placed upon the bid board, ranging from starting bids of $15 for the Angels, to the lowest, $3, which included teams such as San Diego and Toronto. I was able to get my 16 Padres cards for a $7 bid, or roughly 44 cents per card.

Overall, I was happy with the Padres that were pulled. However, from a six-box case, there were more than a few copies. Let's start out with what I consider the best card of the lot. 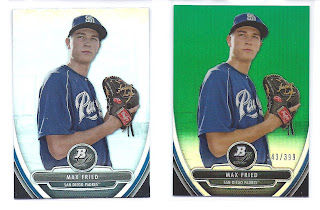 It was nice to get a serial-numbered card. Fried is another lefty arm stockpiled deep in the Padres minor League system. Last May, the 2012 first rounder threw a no-hitter, striking out eight, while walking four in a 1-0 victory over the Great Lakes Loons. He's considered the Padres' #2 prospect by Baseball America, and the 46th overall prospect. 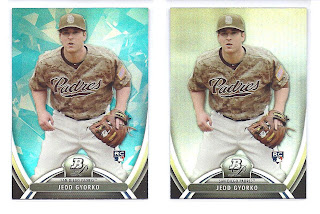 You have to love those camo uniforms. Gyorko was the only Friar with a rookie card in the set. I'm pretty sure this is the ruby variation -- at least I don't think it's the sapphire version. For his rookie season, Gyorko is hitting .249, with 86 hits and 14 homers in 90 games. While he was hitting .284 prior to his strained right groin, he went 4-for-43, with one RBI and 13 strikeouts upon his return. It looks as if he may be rounding back into shape, hitting five homers this month alone. 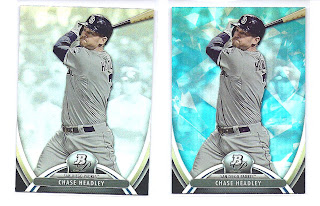 Here's Headley taking a mighty swing. It looks like a decent follow-through, but it's rather hard to tell if it's a hit, or one of his 124 strikeouts. It certainly couldn't have been one of his home run swings -- he's only had two this season. It'll be interesting to see what happens to him after the season ends.

Ross continues on with the Low-A Fort Wayne Tincaps, posting a 3-2 record and a 2.71 earned run average in 12 starts. Hedges, meanwhile, who I can't wait to see working behind the plate in San Diego, was promoted to AA San Antonio, thanks in part to an injury to Missions catcher Robert Kral.

The 2013 version doesn't appear to be that much different than last year's set, other than the fact the backgrounds have been airbrushed out. Last year, the border went up about half the card on both the left and right side; this year, it only goes up about a quarter of the card.

The highlight of the case break was a Dual Autograph redemption card of Jorge Soler and Yasei Puig.
Again, I was quite happy with my Padres pulls and look forward his next baseball case break. But with football season rapidly approachiing, it looks as if his next break will be either the Rookies and Stars Football or Panini Momentum Football.