Well, it appears that 2008 first-round prospect Jaff Decker is the Friars’ choice to replace OF Carlos Quentin, who was placed on the 15-day DL (retroactive to July 31).  If you were to base his abilities on first impressions, his first start Aug. 11 at Cincinnati, left a lot to be desired. He had nothing to show for that start, going 0-3, popping up to third, lining out to left, and then right field. 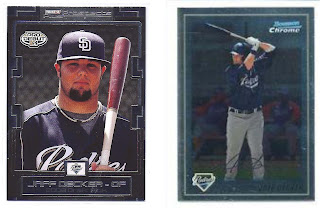 In his previous call-up this year, both pitch-hitting opportunities, he also had little to show for his “cup of coffee.” On June 20, he pinch-hit for Luke Gregerson in the 8th inning, drawing a walk in his only appearance. The next night, he pinch-hit for Tyson Ross in the 7th inning, reaching base on a Brandon League error and eventually scoring on a Chris Denorfia sacrifice fly.
Last, night, however, in a 14-2 shellacking by Colorado in the mile-high city, Dacker collected his first Padre hit, home run and RBI. He singled to left in the 5th inning for his first hit, and then in the top of the 7th, he hit a solo homer to right off starter Jhoulys Chacin, ending the night .
Is Decker the answer for Quentin, who should be available to return later this week? It’s hard to tell. While he hit .293 with 23 doubles, one triple, nine homers and 38 RBIs at Tucson, it's too small of a sampling to project how well he'll do. After all, what's to say he won't get sent back down once Quentin's healthy enough to return?

By the same token, with all the Padres injuries – LF Kyle Blanks (Achilles tendinitis), CF Cameron Maybin (left knee) and Quentin – Decker may get all the opportunity he needs.