Just like Jaff Dacker, 26-year old Tyson Ross may be making enough of a noise to be considered for the Padres' pitching rotation in 2014. On Thursday, Ross pitched seven strong innings against the New York Mets (109 pitches -- 74 for strikes), notching eight strikouts, while allowing one run on five hits. 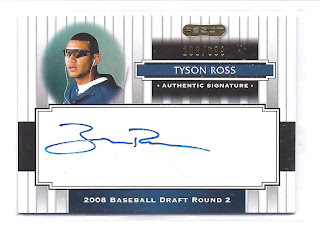 Of course, San Diego went on to lose the game, 4-1, but it was another strong showing for Ross. What's even more impressive, is the 6-foot, 6-inch right-hander has a 1.32 ERA over his last five starts, ever since he was moved from the bullpen into the starting rotation. Adding a changeup to go along with his fastball and slider probably hasn't hurt, either.

Ross came to San Diego last November from Oakland. The Padres sent IF Andy Parrino and P Andrew Werner north to the A's, for Ross and A.J. Kirby-Jones. He's making good on his second call-up with the Padres (July 22), as he was optioned to Tucson on July 9, posting a 1-1 record with a 1.86 ERA.

Meanwhile, there's the possiblity another Ross could be making a bid for the Padres starting rotaton. Tyson's brother Joe,a 20-year old Padres 1st round draft pick in 2011, is currently toiling at Fort Wayne, Ind., San Diego's Low A club. After a decent start, Joe has dropped his last two games and is currently 4-7, with a 6.26 ERA for the Tincaps, with 70 strikeouts and 35 walks. 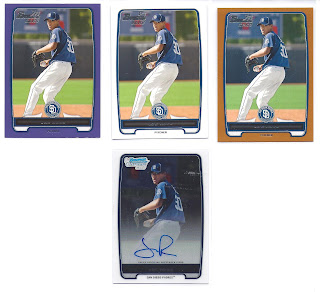 Joe, three inches shorter than his older brother, began his minor league career in the Arizona Fall League. Last year he started in the Fall League, moving on to the Northwest League's Eugene Emeralds, before finishing the year at Fort Wayne of the Midwest League.

It'll probably be a matter of time befor the younger Ross cracks the Padres roster. You have to admit, it would be pretty cool to see the brothers Ross in the same rotation.

I'll probably end up regretting this, but I've started a second sports card blog about my other passion -- hockey cards. I've been enjoying writing about San Diego Padres cards so much, I decided to try may hand at hockey. Especially since we just picked up season tickets of the American Hockey League's Iowa Wild, who begin play Oct. 12.

Check out "Hockey Card Geek" at http://hockeycardgeek.blogspot.com/ .
Posted by Comatoad at 8:10 PM