For some time now, I’ve gotten the Baseball America Prospect Report delivered to my e-mail inbox. It’s a pretty handy service, which gives you a daily highlight of each organization’s minor league players. They’re listed alphabetically by their parent clubs, with hitters listed first, followed by pitchers, so you do have to separate the wheat from the chaff.
Any way you cut it, it’s a great way to keep track of Padres prospects.
For example, Tuesday, Aug. 6’s report includes the stats for RF Jaff Decker and pitchers Keyvius Sampson and Brad Boxberger. The stats represent the games from Monday Aug. 4 – Tucson playing at Nashville (AAA) and the San Antonio Missions playing at the Frisco Roughriders (AA)
Team   Class    Player, Pos                AB    R   H     BI    AVG 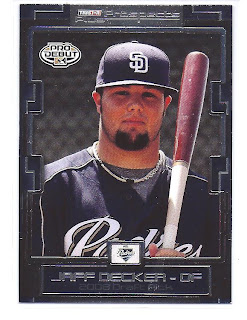 Despite an 8-5 loss, Decker led off the game with a single (and was abruptly caught stealing), adding another single and a ground-rule double, good for his 38th RBI of the season. A Padres’ first round pick in the 2008 draft, Dacker was only able to play 47 games at AA last season, due to plantar fasciitis. At 23 years of age, he’s one of those frustrating Padres prospects who can show flashes of potential and then play so mind-numbingly bland. He actually earned a call-up to San Diego this season after Everth Cabrera pulled his hammy, earning a hit in two at-bats. 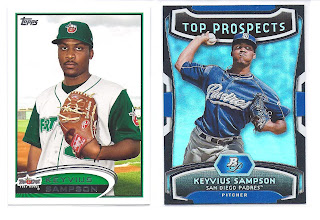 Selected by the Padres in the fourth round of the 2009 Draft out of Ocala Forest (Fla.) High School, Sampson defeated the Roughriders, 1-0 in a Texas League tilt. He threw 92 pitches (63 for strikes), while facing 25 batters. Austin Hedges’ two-out RBI in the top of the 2nd would be all the offense Sampson would need.


Sampson continues to be one of San Diego’s hottest pitchers – whether it’s the minor or majors. Since June, all the 22-year old righty has done, is record 82 strikeouts in 72.2 innings, good for a 1.86 ERA.


Meanwhile in Nashville, Boxberger threw two scoreless innings in relief of starter Anthony Bass. One of the two pitchers acquired in the Latos trade, the former USC pitcher had his A-game going, throwing a total of 84 pitches (56 for strikes). Five of the six batters he faced struck out, while Nashville’s Eugenio Velez grounded out to third.


What will tomorrow bring in the Padres’ minor league system? I’m not sure, but I’m positive I’ll find it my e-mail.
Posted by Comatoad at 6:57 PM