Next-to-last home game of the season

There's always an infinite sadness when the end of the baseball season rolls around. While I enjoy football and hockey's just around the corner, there's a lot to be said for those summer days and nights spent at the ballpark, enjoying America's pastime.

Tonight was the next-to-last home game for the Iowa Cubs, as they played the Omaha Storm Chasers, Kansas City's top affiliate. They then go on the road to Nashville, where they'll complete their last four games of the season. Being a Cubs affiliate, of course, they're not in the playoffs.

So, my wife and I wanted to attend one last minor league game for the year. What made tonight's game even more special, was autographed ball night. The first 2,000 fans would receive an augotgraphed baseball -- by Iowa Cubs players, MLB players, or Hall of Famers -- given out at the gates at random.

Each of us receievd a twisted, brown paper bag when we entered the stadium, but waited until we reached our seats (behind home plate -- being our last game, we decided to splurge). Our autos were from current I-Cubs -- Jan's was autographed by Brad Nelson and mine was by Ty Wright. 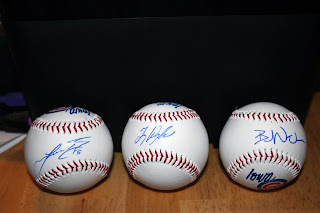 As an added bonus, my wife found another bag that was left by the sink in the lady's room -- Catcher J.C. Boscan. Of the three, Wright is the only one with any remaining potential.

Wright was drafted by the Cubs in the seventh round of the 2007 draft out of Oklahoma State.He was named to the 2010 Southern League mid-season All-Star game prior to being promoted to Iowa in June.

Nelson, who played 1B, is an Iowa boy and was signed by the Cus as a minor-league free agent in December (he was originally drafted by the Brewers in 2001). He made his MLB debut with the Brewers in 2008 and played with them in 2009, as well.

Boscan was signed by the Cubs as a minor league free agent in November. He's actually played in the minors for 13 years, before making his debut with the Atlanta Braves in 2011.

The Cubbies went on to win 5-2, and my player fared better than Jan's -- Wright was 2 for 4, with three RBIs, while Nelson was only 1 for 4. Boscan didn't even play.

It was rather funny to  hear some of the families telling their kids, "Look honey, your ball's up to bat."
Posted by Comatoad at 8:23 PM