Yesterday, RyansCardz, one of my favorite brick-and-mortar card stores had a 12-box case break of 2013 Bowman Chrome. Each team was on the bid board, with prices for each based on what the possible expectations for each team were.  For example, the Twins went for $15 (no bids) and the Angels bidding ended at about $160, thanks in large part to the possiblility of a Puig auto. The Padres opening (and only) bid was $30 (which I won).

As far as the Padres went, I ended up with 31 cards, 19 of which are copies, and one hit. I'll start out with three San Diego Pares stalwarts - C Yasmani Grandal, 1B Yonder Alonso and the ever-present in every card set 2B Chase Headley. Last year Grandal was a Bowman Chrome Draft RC.

I received a Bowman Chrome Prospect of P Zach Elfin (4 copies), as well as Jed Gyorko and Casey Kelly RCs. I was excited by the Gyorko card and would of loved to of had him in a refractor, since his auto wasn't available in this set. My apologies, I forgot to scan one of my five Yeison Asencio Prospect cards. 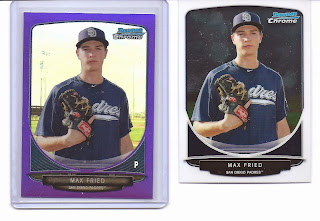 As for my only hit, it was a purple refractor P Max Fried (#73/199). Next to it is Fried's prospect card (5 copies.) Fried was the Padres' 7th overall pick last year, out of Harvard-Westlake High School. In 2012, he was ranked as the Padres' second best prospect and 46th best prospect overall by Baseball America, and to have the best curveball in the San Diego system. At 19 years of age, he appears to have a wealth of potential, putting together a 6-7 record, 3.49 ERA 100 Ks and 59 BBs, at Low-A Fort Wayne. He appears to be doing well against his peers, and I'm looking forward to him stepping up to pitch A-level ball next year.
Overall, this was a fun case break. Did I feel that the Friars cards I receveid were worth the $30 I invested? Not particularly.
What did I learn? I still believe, dollar-for-dollar, that Bowman Chrome is one of the best sets out there, especially if you're looking for younger players with huge upside and definite up-and-comers. This particular case had an awful lot of color in it, rewarding the Braves, Diamondbacks and Twinkies. According to Topps, there's suposed to be one auto in eveery box and every third box will have two autos. If that's the case, we were shorted an autograph. It'll be interesting to see if Topps customer service will make good on that or not.
We also had the hit of the day -- a purple auto refractor of Puig, numbered #9/10. I've seen these on E-bay already going to $3,500+. Despite now having all the Padres base cards, I'll definitely be picking up some packs.
Posted by Comatoad at 1:03 PM