Diamonds in the rough from a 2008 collector

I got a great package in the mail this weekend from Larry over at 2008 Topps Set. And no, they didn't include a bunch of Padres cards from the 2008 Topps set. Judging from this package, I'd say that Larry was a well-rounded connoisseur of exemplary cardboard goodness.

Let's start out with a 2003 Bowman's Best Bernie Castro RC (#BC), a 1999 Flair Showcase Row 1 Ruben Rivera (#90) S/N 1924/3000, and a 2002 Finest Xavier Nady (#100). Nady, the Pads first position player since 1989 to go directly into the Majors following the draft, signed a minor league contract with the Padres. It'll be interesting to see how that turns out. An OF-1B, he's not a bad insurance policy and will, more than likely, be the first one in, should the injury bug hit the Friars again this year.

2001 Royal Rookies Barnstormers Junior Herndon (8), 2001 Upper Deck Minors Centennial Jake Gautreau (#2), 1996-97 Score Board Ben Davis All Sport (#67) (How can you not like catchers, especially when wearing full regalia). Davis may be best known, however, for his drag bunt against Curt Schilling and the Diamondbacks on May 26, 2001. Schilling had a perfect game heading into the eighth inning, when Davis bunted. Despite the fact the D-Backs went on to win 3-1, it generated a bit of hate and discontent between these two teams during the next couple of years.

Another career Padres minor leaguer in three flavors. Kevin Eberwein's 1999 RC in Topps Traded (#T41), Bowman (#405), and Bowman Chrome (#405). He had a strange career progression, moving to A, A+, AA (2 years), A+, AAA, A+, AAA, and then released. He's  now a Mortgage Consultant/Team Leader with FirstCal Mortgage in Las Vegas, Nev. 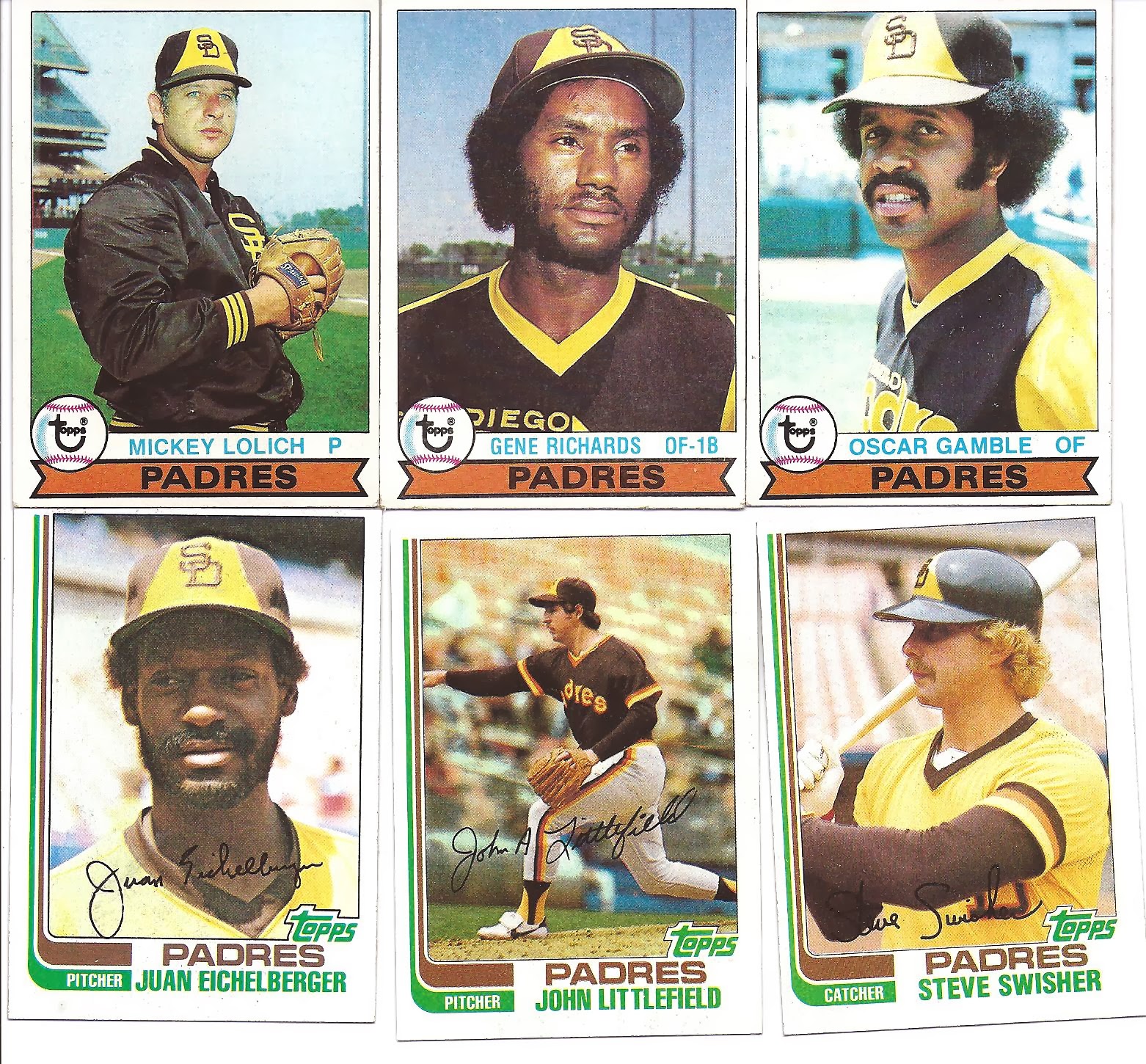 And finally, a parade of brown of yellow from 1979 and 1982. Top Row -- 1979 Topps P Mickey Lolich, OF-1B Gene Richards and OF Oscar Gamble. Bottom Row --  1982 Topps P Juan Eichelberger, P John Littlefield and C Steve Swisher.
Thanks for a great package, Larry. I hope you enjoyed your goodies as much as I did mine!
Posted by Comatoad at 1:25 PM