While waiting to go see "Despicable Me 2" at the movies this afternoon, we walked through Target at the mall to kill some time. As usual, my wife knew I had to stroll through the sports card section, "just to look," Needless to say, when we left the mall, I had a 10-pack value repack baseball box, complete with "Extreme value - 40% savings," sitting in our bag, along with Red Vines and a box of Good 'N Plenty for the movie.

I resisted the temptation to open the box while waiting for the movie to start. By the way, I highly recommend "Despicable Me 2." I thought it was better than the first and the minions had more of a role in this one. That's all I'm going to say about that. 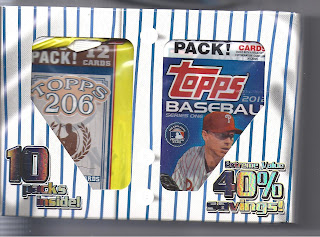 I refuse to open the Pete Rose pack - I don't want to dirty my hands. If anyone wants it, they can have it! But I'll open a couple packs a day, saving the 2012 Topps Jumbo Pack and 2010 Topps 206 Value Pack for last.

Let's start with the Donruss. Unfortunately, no Padres. Besides a Stan Musial puzzle piece, people move along, there's nothing to see here.

I was much happier with the pack of Ultra. Lo and behold I got a Padre...and a Hector Gimenez (Astros) RC. Big whoop on the Gimenez, though. In his 168-game to date career, he's only hit .216 with 2 homers and 11 RBIs. 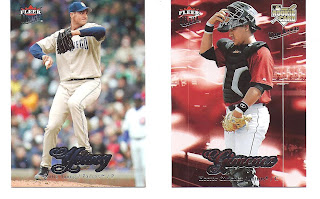