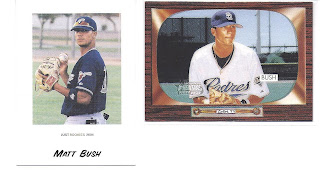 While the Padres have a maddening history of first round draft picks that turn out to be busts, perhaps none have proved more of a bust (to say nothing of being a total embarrasment) than Matt Bush.
An 18-year old shortstop/pitcher out of Mission Bay High School, Bush was the overall #1 pick in the 2004 draft. The Padres should of had an inkling of things to come, however, when he was arrested at a nightclub near the team's Peoria, Ariz. spring training complex, for assault, where he supposedly got into a fight with the bouncer, who wouldn't let him in.
He began his career as a shortstop, but only batted .192 between the Arizona League and short-season Eugene Emeralds. In 2005, he hit .221 (and two home runs) in 453 at bats for the lower A-Level For Wayne Wizards, and in 2006, .263 in 22 games with the AZL and Fort Wayne, before breaking his ankle,
In 2007, the Padres decided to make him a pitcher. In seven games (again within the AZL and Fort Wayne), he struck out 16 batters in 7.2 innings, compiling a 1.17 ERA, but had another early season exit, this time with torn ligaments in his elbow, requiring Tommy John surgery. He missed all of the 2008 season.
In 2009, came the infamous “Matt Bush Incident,” as Bush assaulted a pair of high school lacrosse players with a golf club at Granite Hills High School. After the assault, Bush yelled, “I'm Matt f***** Bush!,” as he drove his Mercedes over a curb and into the Pacific sunset. The San Diego District Attorney’s Office filed four misdemeanor charges against him.
The Padres then decided to cut their losses, designating Bush for reassignment. After signing P Cliff Floyd, Bush was traded to the Toronto Blue Jays, for the infamous “player to be named later.” (I haven’t been able find if they even got a used jockstrap for Bush, much less the “player to be named later”).
A month later, he assaulted a woman at a party in Florida, and was released by the Blue Jays for violating a "zero tolerance" agreement.
In 2010, he signed a minor league contract with Tampa Bay. He showed a flash of promise as a pitcher, with a 4.73 ERA and 77 strikeouts in 50.1 innings, but never rose above the AA-level. Despite being promoted to the Rays AAA club for their playoffs, he never played in a single game.
In March 2012, Bush was arrested following a DUI hit-and-run accident with a 72-year old motorcyclist. Facing seven charges, Bush pleaded no contest, and is currently serving a 51-month prison sentence. He isn’t scheduled for release until 2016.

Interesting side note #1 - With the number one overall pick, apparently the Pads were interested in IF Stephen Drew and P Jered Weaver. However, since they were represented by former Padres player Scott Boras, they didn't want to pay the enormous signing bonus he would have demanded. Instead, the Padres selected Bush, signing him for an "affordable" $3.15 million.
Interesting side note #2 - Bush has the dubious distinction of being one of only three former number one picks to have never played in the major leagues. The other two were P Brien Taylor (NY Yankees, 1991) and C Steve Chilcott (NY Mets, 1966).
Posted by Comatoad at 7:53 PM