Oh, those 1989 Donruss – bright red, with the little black and white speckles on the sides – they’re almost as recognizable as the bright yellow 1991 Fleer cards. Besides the Carl Yastrzemski puzzle piece, I found a pair of rookies, and some “name” ball players, but that’s about it. And again, tonight, I’m shut out on Padres cards. 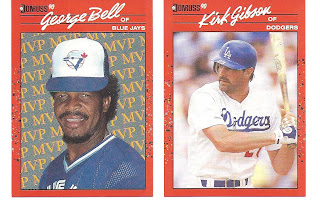 Two of these cards particularly stand out for me. One, is the menacing look of Kirk Gibson at the plate. This was more than likely the look Dennis Eckersley faced in game 1 of the 1988 World Series. In his only plate appearance of the series, Gibson currently the Diamondbacks manager, nailed Eckersley’s 3-2 offering into the right field stands. He then gimped around the bases with his strained left hamstring and injured right knee, pumping his fist into the air.


As for the George Bell photo, I get a kick out of seeing the Jays hat barely fitting atop his late ‘89s ‘fro. I’ve always liked the old Blue Jays logo pictured here, and I’m glad they went back to a variation of it.


As for the 2012 Topps Chrome, it's dissapointing on two fronts: 1) There's only four cards to a pack; and 2) Among those four cards, there's nothing too exciting:

I kind of like the intense reaction exhibited by Jose Valverde. He must be happy about something!

Well, there's now four packs down and five to go (Remember, I'm not about to touch that Pete Rose pack). Tommorrow we'll tear open the two packs of 2012 Topps Opening Day.
Posted by Comatoad at 6:52 PM