Today begins day one of the 11 furlough days for Iowa National Guard technicians. If government officials say sequestration is no big issue, that the military is overstating the significance of sequestration, I beg to differ.
I am the face of sequestration. I have to take one unpaid day off a week, so I'll be losing approximately 20% of each paycheck, in order for the government to make up its deficit. I have to admit, it really, really sucks. We haven't even had a cost of living pay increase in the last three years (or if we did, it was minimal enough not for us to notice).
Sorry for getting on a soapbox. Now, however, time for happy news - let's open those two packs of 2012 Topps Opening Day. To be truthful, I’m not a big fan of this series. Basically, all it is, is 2012 Topps, with an Opening Day banner printed on it. The only nice thing about it, it’s a relatively cheap pack (ain’t that the truth) for younger collectors to spend their allowance on.


Once both packs were opened, this is what I ended up with. 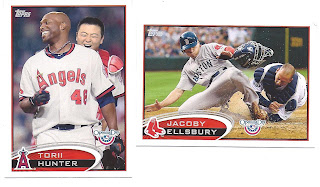 Either Torri Huner is a great comedian, or he must have pulled off one heck of prank. C Hank Conger is even laughing. Almsot makes you wonder, doesn't it? I like the Ellsbury card, since it's hard to find good action shots at the plate. It looks like he's just ahead of the tag of Seattle's Jesus Sucre, as the helmet goes flying.
Here's the inserts. Nothing too impressive... 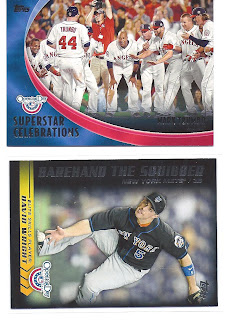