Happy 4th of July to everyone. I hope you and your loved ones had a great and safe time celebrating our nation's birthday today. I wish things had gone better for the Padres today, rather than getting clobbered 8-2 at Boston, Ouch!

Again, as you know, I collect everything and anything Padres. And the two packages I received yesterday certainly didn't hurt in building my collection. 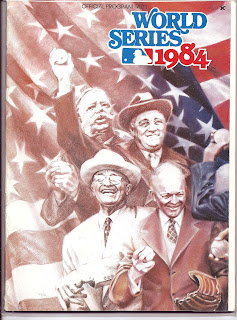 I was thrilled to receive this 1984 World Series program. It was in excellent shape and after thumbing through it, it carefully went into a plastic bag and stored away.

While the Padres' first  World Series trip ended in a disappointing 4-1 loss to the Tigers, the playoff run that got them into the Championships was truly amazing. I remember sitting in back of the Spanish class I was taking at the University of Iowa, wearing a hoody and having an earphone stuck in my ear listening to the San Diego/Chicago Cub series. What a great comback! Fortunately, I wasn't asked to answer any questions that day, but I do remember one of my classmates laughing at me as I jumped up straight in my seat, pumping my fist a couple of times.

My other package included a very nice auto/patch of Yonder Alonso - a 2013 Topps Museum Collection Signature Swatches Triple Relic Autographs. I was pleasantly surprised to get this for about $3 on E-Bay. Besides sporting a nice, crisp autograph and being numbered #49/224, it has a really nice patch in the first of the three panels.Whether it's part of his nameplate, or a corner of his number, I have no idea. 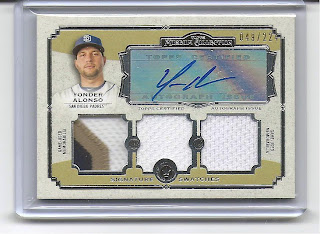 Yonder was almost to the point where Padres fans could realistically say, "Gonzalez who?," when talking about first base. And then he broke his wrist. I actually think the Padres got the better of the Latos-Cincinnati deal.  Once he came off suspension, Grandal's been dong a great job at catcher., Volquez  frustrates everyone with his sporadic pitching  (I wouldn't be disappointed if the Friars do allow him to become a free agent at the end of the year), and Boxberger can still be classified as a prospect at best. He flashed a surprising 2.60 ERA with 33 strikeouts and 18 walks last year with the parent club, and with a 0-3 record at Tucson this year, he needs a bit of work.
I'm now looking forward to next week, as our SportsCardForum Baseball Traders group has set its trades for July. I can't wait to see what's in the mail next week.