Who was shortest catcher in Padres history?

Here's a trivia question for you...Who was the shortest catcher in San Diego history?

On  this date, July 30, 1998, C Carlos Hernandez cracked a pinch-hit, two-run double with two outs in the top of the 10th inning to allow the Padres to salvage the finale of their three-game set with the Mets, 3-1. 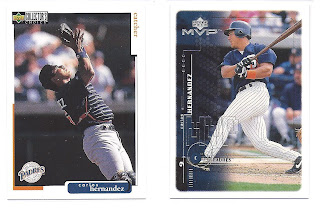 The card on the left, his 1998 Collector's Choice, shows him in full catching regalia, tracking down a pop fly. To the right, is his 1999 Upper Deck MVP card, showing what he could do at the plate, .

The 1998 season got off to a good start for Hernandez, as he rapped a game-tying, two-run homer in the ninth inning of the Padres home opener against the Reds. They would go on to beat Cincinnati 3-2 in 10 innings. Hernandez, meanwhile, would go on to hit career homers (9) and RBIs (52) with the Padres that season.

While Carlos was known primarily as a defensive specialist, he proved to have a surprising amount of pop in his bat, after the Padres signed him away from the Dodgers in 1997.  That pop proved helpful as the Friars went on to win the National League pennant that year. He was also Trevor Hoffman's battery mate in the final game of the 1998 NLCS, a 5-0 win over the Atlanta Braves at Turner Field.

Catching is my favorite position, having played the position myself - and yes, I did have all the tools of ignorance. While I didn't have a great arm for throwing out base runners, I could catch anything thrown at me, nothing got past me, and I could absorb a hit from a runner coming home from third (You didn't have to avoid contact back in those days - you could plow into the catcher if you had the chance).

Was he one the Padres' best catchers? I don't think so, especially with a gentleman named Benito, who preceded Hernandez by a few years. As for me, Gene Tenace was one of my favorite backstops (and I feel often underrated) for San Diego.

Trivia answer -- It was actually a tie. Hernandez, as well as George Williams (who played six games for the Padres in 2000), both reached 5'10" after drawing themselves up to their full height..
Posted by Comatoad at 8:11 PM